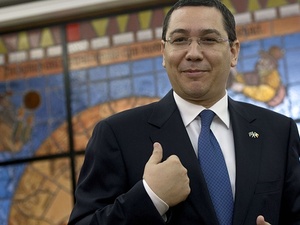 Ponta became the highest-ranking official to be swept up in a major drive by the DNA anti-corruption agency, which has seen dozens of former politicians and judges convicted over the past several years in one of Europe's poorest and graft-plagued countries.

Ponta was charged with fraud, tax evasion and money laundering dating back to 2007-2011, before he became prime minister in 2012, the DNA said on Monday, adding that some of his assets have been frozen pending the outcome of the case.

The announcement came shortly after the 42-year-old hobbled on crutches through a crowd of reporters into the DNA headquarters to face prosecutors over the graft probe that was opened against him in June.

Sources said he had refused to answer prosecutors' questions.

The investigation had sparked calls for Ponta to resign, but he has refused to do so, firmly denying the allegations and promising to cooperate with the probe.

After returning to work on Thursday following a month-long stay in Turkey for a knee operation, Ponta said on Sunday he was stepping down as head of the Social Democrat party while he fought the corruption allegations.

Prosecutors also suspect Ponta of conflict of interest during his time as premier. But that probe was stymied when parliament, where Ponta's party has a comfortable majority, refused last month to lift his immunity from prosecution.

The center-left prime minister's legal troubles prompted a fresh crisis in the European Union's second poorest nation, where Ponta's rival, President Klaus Iohannis, and the opposition has called on him to step down.

The money laundering and tax evasion allegations relate to his activities as a lawyer.

Ponta is accused of receiving the equivalent of around 55,000 euros ($61,000) from Dan Sova, a political ally and member of parliament suspected by prosecutors of abuse of power but who also enjoys immunity.

This probe is the latest in a string of inquiries by the DNA, an anti-corruption agency within Romania's prosecutor's office, that have cost several prominent Romanians their jobs in recent years.

Under the leadership of Laura Kosevi, a 42-year-old former basketball player who took the helm in 2013, the agency upped the pace on anti-graft measures started by her predecessor.

2014 marked a record year for the agency, during which it sent more than 1,100 people to court over graft allegations and had some 10,200 cases under investigation and opened the highest number of new cases since it was set up in 2002.