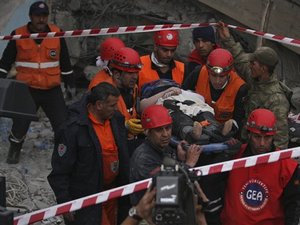 Rescuers on Tuesday pulled a pregnant woman and her two children alive from the rubble 35 hours after a devastating earthquake killed at least 366 people in eastern Turkey, reviving fading hopes of finding more survivors.

Derya Coskun, her daughter Elif and son Ozer were plucked from the debris in Ercis, the town worst hit by Sunday's 7.2 magnitude quake in Van province, media reports said.

Another survivor, 22-year-old Abdullah Pinti, told how he was in a coffee house when the quake struck.

"I immediately hid myself under the table ... I curled myself up and pulled my head into my stomach," he told reporters, while lying on a stretcher with his face covered in black dust.

A medical worker at the local stadium, which has been transformed into a make-shift field hospital, said as he brought in one elderly survivor: "In one hour, it's the seventh miracle that we have saved, including a one-year-old baby."

But with each hour that passes the chances of further rescues fades.

"Tomorrow, it will no doubt be the end of hope," he added.

In Van city, the desperately sad and pleading eyes of a 34-year-old man whose nine-month-old nephew was lying beneath piles of rubble spoke volumes.

"We recovered his baby bed," he said. "God willing we will find him alive too," he said, without diverting his eyes from the scene where the rescue operation continued.

The man said his brother, the baby's father, was also under the collapsed building.

Residents meanwhile spent a second night outside in freezing temperatures.

"I am still trembling... As long as those aftershocks go on, we will stay in the street," Gulizar, a Kurdish woman in her 40s, told Agence France Presse as she tried to keep warm in front of a makeshift fire in Van city center.

With night-time temperatures expected to dip to two degrees Celsius (36 Fahrenheit) and snow forecast for Wednesday, residents took shelter anywhere they could -- some in cars, tents and others under just a blanket.

The confirmed death toll from the tremor, which struck around lunchtime on Sunday, stood at 366 with about 1,300 people injured, the government said Tuesday.

A total of 2,200 buildings collapsed as a result of the quake and aftershocks, including a dormitory in Ercis under which many students were believed to be buried.

"Our house was badly damaged. We will live like this maybe for one or two weeks," said 34-year-old Zuleyha, who was staying in her car with her husband and five-year-old son.

Another resident, named only as Nebahat, said: "We have no heater; we received no blankets, not even pain killers."

"We have been freezing all night; we only had three blankets which I managed to take from my home."

The football pitch in Ercis has been transformed into a sea of tents set up by the Red Crescent as the stadium serves as a make-shift field hospital. About 1,500 units of blood have been sent to the region.

The government said about 2,400 search and rescue teams from 45 cities and more than 200 ambulances were deployed across the disaster-struck area.

Deputy Prime Minister Bulent Arinc said 10 countries had offered to send emergency teams but the government had declined the offers for now. Though Iran, which felt the tremor as well in its northwestern cities, has sent rescuers and equipment.

Greek Prime Minister George Papandreou on Monday said his country "stands ready" to help and Prime Minister Benjamin Netanyahu of Israel, with whom relations have become frosty over the past year, telephoned Erdogan to tell him that Israel "is ready to help Turkey in this painful time," Anatolia reported.

In 1999, two strong quakes in northwest Turkey's heavily populated and industrialized regions left some 20,000 dead. A powerful earthquake in the town of Caldiran in Van province killed 3,840 people in 1976.