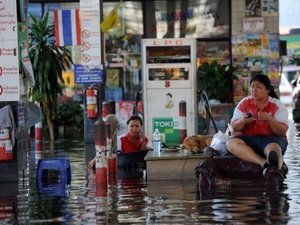 Bangkok's second airport shut down Tuesday as floodwaters advanced into the Thai capital, forcing authorities in "crisis mode" to declare a five-day public holiday in preparation for the deluge.

The cabinet ordered an October 27-31 holiday for Bangkok and 20 other provinces affected by the kingdom's worst flooding in decades, amid warnings a high tide would surge up the capital's main river and escalate the disaster.

"The government has switched to a crisis mode as a massive run-off will arrive in the capital on October 26, coinciding with a high tide on October 28," the Flood Relief Operations Centre (FROC) said in a statement.

Ministers made the decision at a meeting in Don Mueang airport in the city's north, which handles domestic flights and has also been doubling as an evacuee shelter and a headquarters for the flood relief operation.

But as the waters that have already flooded several northern and eastern districts of Bangkok closed in, both airlines operating there, Nok Air and Orient Thai said they were suspending all flights.

"Because a lot of water is creeping into the northern premises of the airport, it could cause planes to slide on the runways," Airports of Thailand said, adding that Don Mueang's two runways would be closed until November 1.

About 100 domestic flights normally operate from the airport each day.

Prime Minister Yingluck Shinawatra, who is facing her first major crisis since coming to power in August, said before the cabinet meeting that the evacuees sheltering there would also have to relocate.

"We will move them to safe areas," she said.

The public holidays are designed to allow Bangkok's 12 million residents to brace for the floods now creeping towards the city center after swamping other parts of the nation, killing some 360 people and damaging millions of homes.

"The public and private sectors have been urged to allow their flood-hit staff some time off, so that they would have a chance to look after their property and protect their homes," said the FROC statement.

Schools and government offices will be closed, while the central bank said it was still considering whether to shut down financial markets during the newly-declared public holidays.

Bangkok governor Sukhumbhand Paribatra made a televised address Tuesday warning residents along the Chao Phraya River in the capital to be on "full alert" after the waterway reached record highs of 2.30 meters on Monday.

"If the situation continues in these circumstances, the water level this weekend will hit 2.60 meters, while our average flood embankment is 2.50 meters high," he said.

In the city center, residents were lining up to buy bottled water directly from trucks resupplying shops, after days of panic-buying emptied supermarket shelves.

Information about the floods has often been inconsistent, with politically inexperienced Yingluck apparently at odds with Bangkok's local administration, run by a rival party, and rumors of tensions with the army.

A defense official in Washington said the U.S. navy had withdrawn several ships, including aircraft carriers, sent to help with relief efforts in Thailand after receiving "mixed" messages from the Bangkok government.

"There were two channels (in the Thai government)," the defense official told Agence France Presse. "One was saying 'Yes' and one was saying 'No.'"

But Thailand's defense minister, General Yutthasak Sasiprapa, indicated that authorities felt they were able to handle the situation themselves.

"We have not denied their assistance, but we have our own aircraft so we would rather use ours," he told reporters, adding however that he was unclear over the details of the U.S. offer and needed to check with the air force chief.

A spokesman from the U.S. embassy in Bangkok said one ship from the U.S. group had docked in Thailand on October 20 and its helicopters had since been on missions coordinated with the Thai army and other U.S. agencies.