Turkey Accepts Foreign Aid, Including from Israel, for Quake 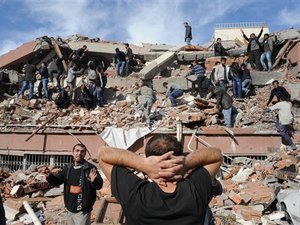 Turkey will accept foreign aid, including from Israel, to cope with a major earthquake that has left 459 people dead, a diplomatic source said Wednesday.

Turkey initially turned down offers of international aid after Sunday's 7.2-magnitude earthquake, but the source said Ankara changed its mind because of the urgent need for housing materials for those left homeless.

Israel's foreign minister told Agence France Presse Tuesday his government had been asked for help by Turkey despite strained ties between the two countries.

"Turkey has asked us for caravans for the homeless after the earthquake," foreign ministry spokesman Yigal Palmor told AFP. "We accepted immediately and we will quickly see what we can supply."

The Israeli defense ministry said a first Boeing 747 would transport mobile homes to Turkey on Wednesday, and other planes would follow in the coming days.

Israel made an offer of assistance on Sunday, shortly after the quake struck, but initially without it being taken up by Turkey. President Shimon Peres called his Turkish counterpart Abdullah Gul to express sympathy.

Ties between Israel and Turkey, once strong allies, have been strained since May 2010 when Israeli naval commandos stormed a flotilla trying to sail to Gaza in defiance of a blockade, killing nine Turks.

Its not journalism to make copy & paste from another newspaper
In this case same article and same words appeared in Hurriyet. the Turkish newspaper.
Thought Naharnet is better than that.

danny b it says "Source Agence France Presse" I thought you guys pride yourselves on being literate and could read .

I'll try to put this to good use imemdatiley.