Karzai to Announce Next Areas for NATO Handover 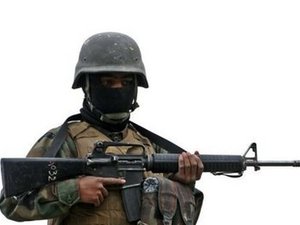 President Hamid Karzai will shortly unveil up to 17 more areas transferring from NATO to Afghan control as Afghanistan prepares to take full responsibility for security by 2014, an official said Wednesday.

Most of Herat and Kabul were already handed over to Afghan control in a first wave of transition in July, but some districts remain under NATO's remit.

Karzai "will announce the names of the provinces... at Istanbul conference on November 2," Abdul Khaliq Farahi, director of the Independent Directorate for Local Government, told a press conference in Kabul.

"In the second phase of transition there are 17 provinces, but some of them (will transfer authority for) the entire province, others include districts," Farahi said.

The phased transition from foreign to Afghan control across the war-torn country is part of a timetable set to withdraw all U.S.-led NATO combat troops from Afghanistan by the end of 2014, leaving the Afghans in charge.

Although there is widespread criticism of the Afghan army and police, and their ability to stand alone, NATO Secretary General Anders Fogh Rasmussen has said he is confident that transition will be completed by 2014 as planned.

Farahi said a meeting would take place on Wednesday to listen to the views and concerns of local leaders from the likely areas for transition, and could lead to the removal of some troubled districts from the list.

But the names of the provinces are unlikely to be changed, he said.

The entire province of Parwan, where a fuel tanker was bombed overnight, leading to the deaths of 10 people, would be part of the second phase.

Other provinces likely to be handed over in their entirety are Balkh, Daykundi, Nimroz, Samangan, Sar-i-pul and Takhar.

Parwan is considered generally peaceful and is home to Bagram, one of the biggest U.S.-run bases in Afghanistan.

Kabul city was handed over in 2008, with most of the wider province handed over last July. But the next phase would see the transition of the final district of Sarobi, where French-led forces have been battling the insurgency.

Laghman province has been badly troubled by insurgents throughout the 10-year war, particularly by the Hezb-e-Islami faction led by former prime minister-turned-rebel Gulbuddin Hekmatyar.

Only Qarghayi district in Laghman would be ready for the handover, said the local government directorate.