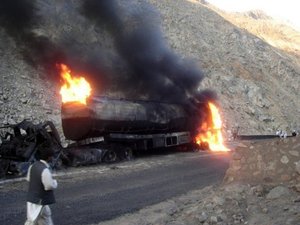 At least 10 people were killed and two dozen wounded Wednesday when a fuel truck targeted by a bomb erupted in flames in northern Afghanistan, a provincial official said.

A magnet bomb stuck on the side of the tanker blasted a hole in the fuel truck.

It was not clear what caused the second explosion.

But a Parwan hospital said it had received three dead and 35 injured, while Khalid earlier gave the toll at 50 dead or wounded.

There was no immediate claim of responsibility. In northwest Pakistan, Taliban and other Islamist militants routinely blow up NATO tankers carrying fuel from the Arabian Sea to U.S.-led troops in landlocked Afghanistan.

Although violence has increased in northern Afghanistan, the region has been spared the worst fighting in the 10-year war, with most Taliban attacks concentrated on NATO and Afghan troops in the southern and eastern regions.

But there appears to have been a spike in attacks in the north since last month's assassination of government peace broker Burhanuddin Rabbani, a former president and key leader in the ethnic Tajik and Uzbek Northern Alliance.

On Sunday, a suicide bomber targeted Interior Minister Bismullah Khan as he travelled through Parwan.

On October 15, four Taliban bombers blew themselves up at a U.S.-run development base, killing two men in the first suicide attack to hit in the northern province of Panjshir.

Khan is an ethnic Tajik former anti-Soviet commander who fought the Taliban alongside Afghanistan's northern hero Ahmad Shah Masood and was appointed to the interior ministry post in June last year.

The Taliban, dominated by ethnic Pashtuns, have so far shown little willingness to talk peace despite various overtures by Western and Afghan brokers, 10 years since the U.S.-led invasion ousted them from power.