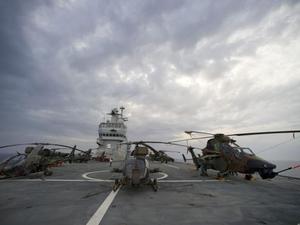 Pakistani officials on Wednesday accused NATO helicopters of violating Pakistan's air space over the Taliban and Haqqani stronghold of North Waziristan, along the Afghan border.

The helicopters flew in from the eastern Afghan province of Paktia and circled the border village of Zoi Nara for more than five minutes, the official in the provincial capital Peshawar said.

But a spokesman for NATO's U.S.-led International Security Assistance Force told AFP that their "operational reporting" showed that no ISAF helicopter crossed the border, which is unmarked in many places.

A Pakistani military official said the choppers left after "warning shots" were fired by Pakistan troops. Officials said they were not attack helicopters.

Dildar Khan, a tribal police official in Datta Khel, said the helicopters flew at a relatively low altitude and returned after the warning shots.

Militants are dug in on both sides of the border and U.S. Secretary of State Hillary Clinton last week called on Pakistan to do more to squeeze militant havens on its territory, particularly those of the Haqqani network.

NATO said Monday that 200 Taliban-linked militants were killed or captured in military operations lasting about a week along the border designed to hit the insurgency hard ahead of the winter, when rebels retreat to hideouts.

In the tribal district of Bajaur, officials said an anti-Taliban elder was killed by mortar rounds fired across the border from Afghanistan.

"A tribal elder Malik Rehman was killed when one shell hit his house," Nasim said. An intelligence official said the shells were fired from Afghan province Kunar and that Rehman was member of a government-sponsored anti-Taliban militia.