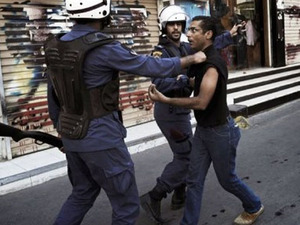 A bomb blast killed two Bahrain policemen and wounded six others Tuesday in an area often shaken by clashes between security forces and Shiite Muslim protesters, the interior ministry said.

Bahrain has seen frequent unrest since the minority Sunni rulers of the small Gulf kingdom crushed a Shiite-led uprising four years ago.

The blast in Sitra island outside the capital Manama comes days after the Bahraini authorities announced they had foiled an attempt to smuggle weapons from Iran.

Police blocked routes leading to the island following the explosion -- the latest in a series of blasts targeting police in Shiite villages, witnesses said.

"The explosives used in the terrorist incident are of the same quality of explosives seized recently while being smuggled from Iran," the BNA state news agency reported.

The interior ministry described the blast as a "terror" attack.

Footage of the aftermath of the explosion showed a shrapnel-riddled police bus with shattered windows.

Since the Arab Spring-inspired 2011 uprising, protesters demanding political reforms have clashed frequently with security forces in Shiite villages outside Manama.

Human rights groups say at least 89 people have been killed.

Prominent opposition figures have been jailed, including the leader of the Shiite opposition Ali Salman, who was sentenced in June to four years in prison for inciting disobedience and hatred.

Al-Wefaq, which is headed by Salman, condemned the bombing.

"Such incidents have nothing to do with the peaceful (opposition) movement... that demands democratic change in Bahrain," it said in a statement.

In March 2014, three policemen were killed in the kingdom's deadliest attack against security forces.

They included an Emirati officer from the Saudi-dominated Gulf force that rolled into Bahrain in March 2011 to boost the security forces.

Bahrain, home to the U.S. Fifth Fleet, and other Sunni-ruled Gulf kingdoms accuse Shiite Iran of inciting unrest across the Middle East.

Manama recalled its ambassador from Tehran over the weekend in protest at "hostile" comments by Iranian leaders.

Saudi Arabia, a strong backer of Bahrain, denounced the Iranian statements on Bahrain as "aggressive."

Wherever they are, they are all the same: traitors to the country they live in, their allegiance will always be to Iran, terrorists and thugs.