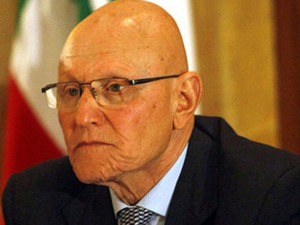 Officials close to Prime Minister Tammam Salam were not optimistic on Wednesday on a possible solution to Lebanon's political crisis as top diplomats rushed to his support to stop a possible resignation decision.

The officials, who were not identified, told al-Joumhouria daily that “all efforts, which had been exerted until Tuesday, hit a dead-end as a result of inflexible stances that caused a failure in coming up with solutions” to controversial issues.

“Neither a solution has been found to the waste crisis nor to the government's working mechanism,” they said.

The two issues have further complicated the work of the government, which has assumed the responsibilities of the president amid the vacuum at Baabda Palace.

But top diplomats have rushed to Salam's support. Among them are the U.S. and Saudi Ambassadors, the head of the Arab League and the U.N. Special Coordinator for Lebanon, said al-Joumhouria.

Government sources also told al-Mustaqbal newspaper that the Egyptian Ambassador has held contacts with several parties represented in the government to urge them to preserve the cabinet.

A high-ranking Egyptian diplomat said that Cairo is in contact with all Lebanese sides because it is keen on Lebanon's stability.

Recently, there have been rumors that Salam would resign over the failure to bridge differences between the bickering parties and his inability to find a solution to the government's decision-making mechanism and the waste crisis.

The Free Patriotic Movement has stressed that its ministers should have the right to coordinate with Salam on setting the cabinet's agenda because they consider themselves as representatives of the president in his absence.

Their conditions have crippled the cabinet and intensified the tension between the different parties.

The situation worsened when on July 17 the Naameh landfill was closed. Waste continued to pile up in dumpsters until a temporary solution was found for Sukleen to collect garbage in Beirut and Mount Lebanon earlier this week.

But local officials and residents of several regions have blocked roads and held protests to stop the possible transfer of the waste to their areas.

The FPM and Hezbollah are driving the country into total chaos. If the government resigns, it will be the last functional constitutional institution. The president is the one who holds consultations to form a new government, names the PM as a result and signs the decree of the formation of the new government. With Aoun and HA boycotting the presidential elections, no government can be formed and no president can be elected. The end result: a call for a constituent assembly to re-write the constitution and give more powers to nassrallah. ... the demise of the Lebanese state.

More and more FPM people are talking about Federation and Partition.
Ebola will take all the South and the Bekaa to link it with South of Syria up to South of Iraq and to Iran.
A small Christian area will be left in the North to link with Alawistan...
Gone Lebanon. Gone National Unity and Coexistence. Gone "Lebanon the Message". Gone many Christians to Europe, Canada and Australia.
The traitor executing all this has one name: the mareedman of Rabiyeh.

Caporal is executing the orders which will result in destroying the institutions and the National Pact with the aim for Ebola to impose the Mutelateh.
I appeal every Christian to denounce the Caporal as the greatest enemy of the Christians.

Caporal = kalb Ebola
This is why Ebola followers like him...

"But top diplomats have rushed to Salam's support. Among them are the U.S. and Saudi Ambassadors, the head of the Arab League and the U.N. Special Coordinator for Lebanon, said al-Joumhouria.

Government sources also told al-Mustaqbal newspaper that the Egyptian Ambassador has held contacts with several parties represented in the government to urge them to preserve the cabinet."
.
top Vatican diplomatic say that the Presidence of Lebanon belongs to the Cristhian block

tric-iran, were you born retard or became one growing up?

Tric Trac is BOTH...