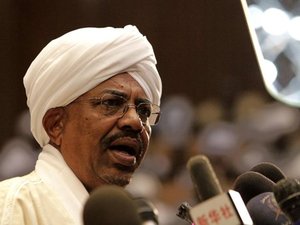 "One part of the armament of the forces which entered Tripoli was 100 percent Sudanese," he said in the eastern city of Kassala where he was opening a new Qatari-funded road link to Eritrea.

"The Sudanese people gave its support, both humanitarian assistance and weapons, which were delivered to all the revolutionaries, in Misrata, in the western mountains, in Zawiyah and in all of Libya's regions," he said in a speech broadcast by state television.

Bashir said Gadhafi’s regime had armed and financed the Justice and Equality Movement in its 2008 march on the Sudanese capital that saw the most heavily armed Darfur rebel faction reach Omdurman just across the Nile from Khartoum.