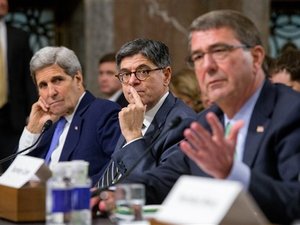 Many Republicans and some skeptical Democrats have voiced concerns that the historic accord reached with the Islamic republic this month in Vienna would trigger a regional nuclear arms race, embolden and strengthen Iran and put key U.S. ally Israel in jeopardy.

U.S. Secretary of Defense Ashton Carter acknowledged that the deal removes "a critical element of risk and uncertainty" in the region.

But, he told lawmakers, U.S. forces will remain vigilant in maintaining Middle East stability and defending Israel, degrading and defeating the self-described Islamic State extremist group, and serving as a bulwark against Iranian hegemony.

"We will continue to maintain a strong military posture to deter aggression," Carter told the Senate Armed Services Committee.

"We're continuing full speed ahead, standing with our friends, standing up to ISIL, and standing against Iran's malign activity," he added, using an acronym for the group.

The White House has mounted a full-court press on Capitol Hill to convince members of Congress to back the deal. The Senate and House of Representatives are expected to vote to approve or disapprove of the nuclear accord in September.

Critics argue that the deal would essentially legitimize Iran as a nuclear threshold state.

And because it would lift economic sanctions on Tehran, including unfreezing at least $50 billion in foreign reserves, the regime would become flush with cash that could be used to beef up its conventional weapons stockpiles, influence proxies like Hizbullah in Lebanon, and support strongman Bashar Assad in Syria.

The nuclear agreement, he added, would "unshackle this regime in its long-held pursuit of conventional military power, and may actually consolidate (its) control in Iran for years to come."

While the nuclear deal would effectively cut off Iran's pathway to developing an atomic bomb, Carter argued, it places "no limitations on what the Department of Defense can and will do to pursue our defense strategy" in the Middle East.

"If Iran were to commit aggression, our robust force posture ensures we can rapidly surge an overwhelming array of forces into the region, leveraging our most advanced capability, married with sophisticated munitions that put no target out of reach," he said.

General Martin Dempsey, the outgoing chairman of the Joint Chiefs of Staff, testified that Iran's ballistic missile, weapons trafficking, mine usage and related efforts were still a primary concern.

"We have to pay more attention to the malign activities," Dempsey said.

After meeting with Obama at the White House, Democratic House Minority Leader Nancy Pelosi said he "made a strong and forceful case for supporting the nuclear agreement with Iran."

"It is clear that this agreement offers the best, long-term plan to stop Iran from building a nuclear weapon," she added.

"All options remain on the table should Iran take any steps toward a nuclear weapon or deviate from the terms of this agreement," she stressed, using a phrase commonly used to suggest potential military action.