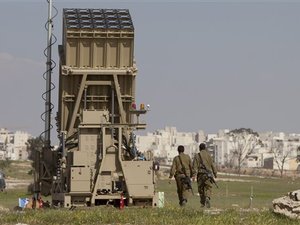 Israel has deployed the Iron Dome defense system to the north on the border with Lebanon, likely amid fears that Hizbullah could get an infusion of cash and weapons from Iran after the nuclear deal.

In an exclusive interview with FoxNews.com, the commander of Israel’s Active Defense Air Wing, Col. Yoni Saada Marom, said that the military drills were not a direct reaction to recent events, but made clear that Hizbullah and other groups close to Israel's borders presented a potentially heightened threat.

“We are dealing with the challenges and scenarios that we think the enemies from the north will bring,” Maron said.

The unique defense system locks onto the co-ordinates of incoming missiles targeting population centers and destroys them in mid-air before they can reach their intended target, said FoxNews.

Asked whether he thought Hizbullah is imminently planning to attack Israel, Marom said: “As a military commander I cannot deal with their intentions.”

“They can do whatever they choose to do, and I, as a defender, need to be ready for that. I cannot control his mind, but I can defend my country and defend our sovereignty,” he added.

Hizbullah leader Sayyed Hassan Nasrallah said last week that Iranian officials have reiterated that the country's stances towards the party would not change.

He thanked Tehran “for all the moral and financial support.”

Critics argue that the nuclear deal with Iran would essentially legitimize the country as a nuclear threshold state. And because it would lift economic sanctions on Tehran, including unfreezing at least $50 billion in foreign reserves, the regime would become flush with cash that could be used to beef up its conventional weapons stockpiles, influence proxies like Hizbullah, and support strongman Bashar Assad in Syria.

Israel seems to be more eager to backup their takfiri brother in March 14 Alliance and Syria.

How does it feel to see Assad still sitting comfortable on his chair ya takfiri canada?