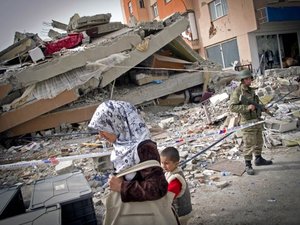 As night-time temperatures dropped to below zero and snow was forecast to fall overnight, authorities were in a race against time to provide some form of shelter for the thousands of people who faced another night out in the open.

The last official death toll was 471 and more than 1,600 injured, but the International Federation of Red Cross and Red Crescent Societies has said that "hundreds, possibly thousands" of people are still trapped under the rubble in eastern Van province.

While a 27-year-old teacher was plucked to safety in the early morning, hopes of finding more people alive were fading fast.

Excavators in Van began clearing rubble on Wednesday evening as rescue workers estimated that no survivors were left beneath the debris.

With complaints about the pace of the relief effort mounting, the government finally agreed to accept help from abroad although Erdogan insisted that things were now coming under control after a tricky beginning.

"We accept that there were some failures within the first 24 hours," the prime minister said in remarks on Turkish television, in particular acknowledging problems with the distribution of tents.

However he also said it was understandable that there would be teething problems given the scale of the disaster and that he had sent a number of ministers to oversee the relief efforts.

"Almost a quarter of the cabinet is there now ... we have brought the situation under control in the last couple of days," he said.

There have been frequent complaints among residents of the mainly Kurdish region that the Ankara government would have acted faster if disaster had struck elsewhere.

"We did not discriminate between Turks, Kurds or Zaza people ... We said that they are all our people," Erdogan said.

But the revelation from the Turkish Red Crescent that 17 aid trucks had been raided highlighted the sense of despair among survivors.

Ahmet Lutfi Aker, the national head of the organization, told Agence France Presse that the trucks had been looted both in the provincial capital Van and in Ercis, the town which bore the full brunt of the quake.

Locals in Ercis recounted seeing the driver of one of the trucks assaulted before his attackers made off with food and blankets.

There was uproar among the crowds on Wednesday when they learned that the local governor's office had stopped distributing tents, instead transferring responsibility to village headmen.

"Yesterday I waited here until midnight and I received nothing. I came back this morning at 3:00 am and have been waiting since then and now the distribution is canceled," said 29-year-old Erdal Bayram, a construction worker.

"I need a tent for myself and for my father. We made a makeshift tent to sleep under but it rained last night and the wind was blowing."

While the government initially refused outside offers of help it reversed that decision late Tuesday.

"We were not expecting such a huge demand for tents," the daily Milliyet quoted Besir Atalay, the deputy prime minister, as saying.

"When people ask for tents for 100,000 households, you cannot meet that demand."

Israel's foreign ministry said that it had been asked to help despite the recent deterioration of ties between the two countries.

After the rescue of a 16-day-old baby, her mother and grandmother sparked scenes of joy on Tuesday, emergency teams managed to beat the odds again on Wednesday by pulling 27-year-old Gozde Bahar from the debris of her home. The teacher was immediately rushed to hospital after a 66-hour ordeal.

But her rescue was a rare slice of good news as the number of body bags mounted.

In the village of Guvecli, locals said they had had to recover the bodies of their loved ones by themselves.

"We had to do it by our own means, by shovels and digging tools," Guvecli resident Ahmet Yayin told AFP as he clustered around a fire to keep warm.

As well as the offers of help in the relief effort from abroad, there have also been other shows of solidarity.

During his weekly general audience in St Peter's Square, Pope Benedict XVI called on the world's Catholics to pray for those who had lost their life and "be spiritually close to many who are in distress."