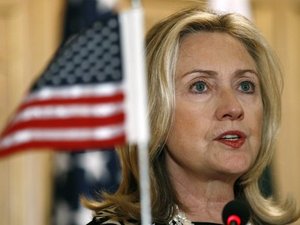 U.S. Secretary of State Hillary Clinton said Wednesday that Iran was "morphing into a military dictatorship."

Clinton said confusion about who is calling the shots in Tehran has also complicated U.S. efforts to communicate with the Iranian leadership.

"It's been a little confusing because we're not quite sure who makes decisions anymore inside of Iran, which I think is an unfortunate sign and kind of goes along with the ascendancy of greater military power," she told the BBC's Persian-language channel.

"I think Iran unfortunately is morphing into a military dictatorship."

She said Washington had tried many different approaches to communicating with Iran, and was open to "front channel, back channel" communications.

"But I believe there's a power struggle going on inside the regime and they can't sort out what they really are willing to do until they sort out who is going to do what," Clinton added.

"And therefore I think there's an opportunity for people within the country to try to influence how that debate turns out."