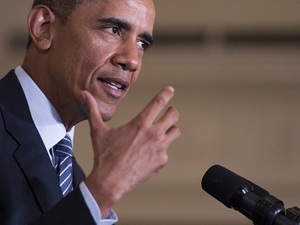 President Barack Obama has warned that any possible rejection by the Congress of the Iran nuclear deal, would force the U.S. to attack Iran, a move that could lead to a Hizbulalh retaliation against Israel.

"It would be destructive both to the U.S. and to Israel," Obama told Jewish leaders on Tuesday, according to Israeli media reports.

"An American military action against Iran's nuclear facilities will not end with Iran declaring war on us. Iran's defense budget is $15 billion. The American defense budget is $600 billion. What Iran would do, and could do, is respond a-symmetrically by increasing its support of terrorism."

"Hizbullah rockets will rain down on Tel Aviv," he stressed.

The U.S. president's meeting came hours after Israeli Prime Minister Benjamin Netanyahu participated in a live webcast aimed at Americans Jews. The PM railed against the agreement to curb Iran's nuclear program in exchange for billions of dollars in sanctions relief, calling it a "bad deal" that leaves Tehran on the brink of a bomb.

The White House is preparing for the likelihood that lawmakers will vote against the deal next month and is focusing its lobbying efforts on getting enough Democrats to sustain a veto. Only one chamber of Congress is needed to sustain a veto.

What do you know? For once the President of the United States uses the same words and agrees with me.

For once, I didn't give you a negative vote on your commenting.

Yep myth, everyone knows that if iran is attacked it's mercenaries in Lebanon will attack israel then go hide in their prepared holes while their women try to and the rest of lebanon gets murdered by israel.

So the fact is, me the loser on Naharnet. Wrote those words long before Obama, because it is the truth.

While you copy another guys name and acts like you are less of a looser?

Finally admitting what texas? I've been writing that the Resistance will support Iran, for a long time now. You act like you discovered something, old news.

Behalf of Iran, Syria and any country that supported the Resistance in Dark times.

M14 acts on behalf of America and Saudi Arabia.

The words that came from Obama's mouth ya Mystic are worth their worth in gold, Obama and your mouth have both confirmed that Hezbollah has nothing to do with Lebanon or the protection of minorities, that Hezbollah will readily put Lebanon on the chopping block for the sake of anyone that is Non-Lebanese. As of today, you will need to hide yourself, you do know that this time if you provoked Israel, maybe Lebanon will be gone for good and Hezbollah will be cremated forever. But what do you care ya Mystic, Lebanon is but a sacrificial lamb, all for Iran and Syria.

Actually southern, obama agrees with Myth that hezballah are the terrorists, same words you see,
.

Would be strange if he said the Resistance are freedom fighters, Al Qaeda in Golan so close to Israel are considered peaceful rebels, because they are not a threat to the zionists.

The Resistance are called Terrorists because they ended the American and Israeli occupation of Lebanon.

All extrimists, wether Israelis or Hezbollahis or Assadists or daeshishts are the ennemies of our country.

M14 are extremists, all they care about is talking about the Resistance all day long, while they have their pockets loaded with saudi dollars and other financial assets.

You can easily be bought, the Resistance can not.

What politicians are those texas?

@Mystic "You can easily be bought, the Resistance can not."

Except with filthy Khamenei money, only the most corrupt "leader" in the entire world. What is his personal wealth by the last count?

We absolutely cannot succeed as a country with HA, simply because HA'S objective is different from Lebanon's.

Shabeb, nobody cares what the March 14 wants, that is the problem. We already know what you want, you believe you are the "real" Lebanon and we believe we are the ones, let's leave it at that.

That is the reason we can't agree on a President aswell.

The Resistance pledges loyalty to all countries that supported them in Dark times.

Clothes are not relevant in this discussion texas, we can go on forever about being real Lebanese, that is something the politicians in the cabinet can discuss about.

Southern, you said and I quote, ""I prefer being occupied by the US..." : you mean to be like Iraq "I wish we still are under French mandate" : to be like Mali, great assessment!! I have seen what Iranian occupation does to people and here I cite Gaza whose people now openly criticize the pro-Iranian lackey leaders. I move around Gaza and see literally nothing standing anymore, and a people living like Zoo animals with nowhere to go. Then I move over to Yemen a country near obliteration, famine and destitution, all thanks to Iranian meddling. I look at the Syria that is nearest to my land and the rest I'll leave to the readers to judge. So long for your views, you lost all forms of integrity, that alone should make yo think twice, but hey, are people like you capable of that?

BJ, you are a Lebanese living in the US. BJ, the population of the Lebanese in Mali now stands at over 15,000 Lebanese, most of who are M8 leaning folks. BJ, in France I cannot even begin to count how many Lebanese now live there. But BJ, if you don't like France or the US, why do you write here and do nothing about it? Just like Charity, it all starts home, so you're sore with France or the US? Leave, and come back to our Sukleen country, at least the US and France have an exit policy for those who don't like what their hosts are doing. On your way back, just check for me the number of Lebanese Shiite in Detroit Michigan, just to start off with.

United States of America, the Killers of Cristhians Civilization in Levant and protectors of the Jews-Mecca in the region!!! When united states abandon iraque they now very welll that the Cristhianity will be erased from the region!!! the American Daesh Army...look how the President of United States talk about the security of the Jews and the silence of President of United Daesh of America of what the Vatican call the destrution of cristhians civilizationin the middle east!! United States is a daesh terrorist state from the point of view of cristhianity...from the point of view of the jews and mecca, united states are great alies!!!

More like March 14 is the local Israeli saudi mouth piece and fan club in Lebanon.

Even better texas, go to Akkar and Tripoli and you will find pictures of Osama bin laden and ISIS/Nusra flags on plently of street corners.

You haven't been around most parts of Tripoli then.

So who are the friends of Lebanon humble?

wait .. so the USA is the mother of all terrorists but your vilayet e faqih just made a deal with it?

We call it victory. The Resistance is still here and now fighting Israeli takfiri minions for the sake of all free Lebanese.

I thought it was 1% of Syria they still held? Your illusions gets better and better, facts on the ground remains different.

Saudi soldiers seems to have a high mortality rate aswell these days in Yemen, still clashes in the outskirts of Aden aswell, Hadi is still hiding in Saudi Arabia, so there is no reason for the Ansarullah to stay at his ruined palace.

Saudis lost an Apache Helicopter today aswell, it will not be easy for them.

This article is fake - The only journal in the would to publish these comments is Naharnet. What is the source??

Obama is trying to scare the American Jewish lobby into supporting the deal with Iran. He is telling them "either I get this deal or I'll go to war". This is putting the Jewish lobby in a bind: if they don't support the deal and America does go to war, the American public might blame the Jews for the war. I think that this is a psychological game that Obama is playing. Just my take.