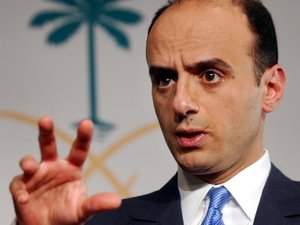 Iran's foreign minister, Ali Akbar Salehi, has confirmed an Interpol request concerning a suspect wanted over U.S. allegations of an assassination plot, but suggested the name was too common to pinpoint the individual, Iranian reports said Thursday.

"There are 150 Gholam Shakuris (in Iran). Interpol sent us a question about this name, and our investigation showed a certain Gholam Shakuri who lives in the United States and is a member of the Mujahedeen-e Khalq Organization," Salehi was quoted in Iranian media as saying in Saudi Arabia.

The United States alleges Gholam Shakuri is an Iranian official in the Quds Force, a shadowy special operations outfit in Iran's Revolutionary Guards, and that he co-conspired with an Iranian-American car salesman, Manssor Arbabsiar, to kill the Saudi ambassador to Washington.

While Arbabsiar is in U.S. custody, U.S. officials say they believe Shakuri is in Iran and they have called on Tehran to turn him over to face charges.

Iran has strongly denied any involvement in the alleged plot.

It has also suggested that the Shakuri being sought is part of the Mujahedeen-e Khalq Organization, a Paris-based Iranian exile group, also known as the People's Mujahedeen of Iran that aims to overthrow Iran's Islamic regime.

The United States and Iran consider the group to be a terrorist organization but it was removed from a list of 50 banned militant groups compiled by the European Union in January 2009.

Salehi made the comments in an interview with Saudi newspaper Asharq al-Awsat during a visit to Riyadh for the Tuesday funeral of Saudi Arabia's crown prince Sultan bin Abdul Aziz.

In the exchange, the Iranian foreign minister again denied that his country plotted to kill the Saudi ambassador to Washington, Adel al-Jubeir.

"We reject these accusations. There is no justification for Iran, which is a brotherly country to Saudi Arabia, to do such an act. It's an American accusation -- they want to create divisions between Muslim countries and especially the two most important countries in the Islamic world, Saudi Arabia and Iran," he said.

He also noted that Arbabsiar had pleaded not guilty in a New York court this week to the charges, and ridiculed the idea that Iran would engage such a character in the alleged plot.

Despite the repeated denials of Iran's involvement, Saudi Arabia has said it is taking the U.S. accusations very seriously and was mulling "a suitable response."

Even before the plot claims, the ties between the two regional rivals were strained over Saudi Arabia's military assistance to Bahrain to put down pro-democracy protests by Shiite demonstrators.