Zarif in Beirut Next Week over Iran Nuclear Deal 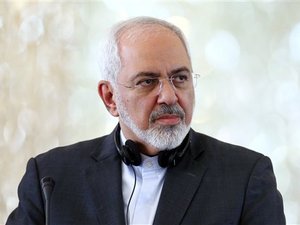 Zarif will make the visit on August 12. He is expected to meet with top officials and political figures who are allied with Iran.

The nuclear deal was negotiated between Iran and six world powers last month.

While the deal would effectively cut off Iran's pathway to developing an atomic bomb, it would lift economic sanctions on Tehran, including unfreezing at least $50 billion in foreign reserves.

U.S. President Barack Obama warned Congress on Wednesday that blocking the accord would damage the nation's credibility and increase the likelihood of more war in the Middle East.

Why Lebanon should welcome an enemy?

how exactly is iran an enemy? did they ever bomb lebanon? ever harm us in any way? your stupid propaganda only echoes israel's wishes: to see us turn our backs on our friends, those who helped us kick out the occupiers and regain our sovereignty

and joetakfiri: that's your opinion, but your opinion is irrelevant here. zarif will come and be welcomed and you'll just have to choke on it.

but your opinion is relevant?

Joe, on the contrary, Mr Zarif is most welcome indeed, I would readily give him the red-carpet treatment, and for good reasons. Mr. Zarif is coming to break the hard, bad and difficult-to-digest-news to his Lebanese lackeys. basically it will be like, "sorry guys, but 2015 is different from 2005, Iran is broke, Amreeka, the EU, the Nuclear club and us have made a deal, so leave Lebanon elect its new president (NOT Aoun), do not cross Uncle Sam's red lines for God's sake, and about that Shiite Crescent,...guys, it won't work, tomatoes and potatoes prices are just too exorbitant for our people".

Today our Defense Minister Moqbel extended the LAF's top command mandate by another year. Zarif is due to Beirut, and only 2 days ago, the US warned about anyone crossing its red lines in Lebanon. If anyone still doubts that the US is the one calling the shots in the world and that everyone literally works for the CIA, then you need to go back to the drawing table for updates. Just remember, when that Red Phone rings, even if you had Angelina Jolie as you night guest, you'd have to drop it all and rush to the phone, or else....