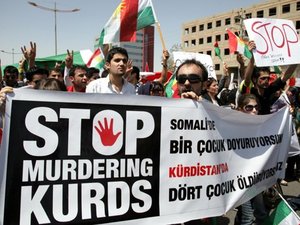 The army last week announced that they initiated an extensive ground operation supported with air strikes "in five different spots" both inside the country in southeast Turkey and across the Iraqi border.

It was not immediately clear from the minister's remarks whether operations had ended all five spots.

The operations involved 22 battalions, but the army did not specify the number of troops dispatched to Iraq.

Commanders of the operation in Kazan valley, including the chief of the general staff Necdet Ozel, are returning from the region, Yilmaz told reporters in Ankara.

Geographically the valley extends between Hakkari province in southeastern Turkey and northern Iraq.

The army operation came after the rebels of Kurdistan Workers' Party (PKK) in a series of coordinated attacks killed 24 soldiers and injured 18 others in Cukurca town of Hakkari province near the Iraqi border on Wednesday last week.

The latest attack of the PKK caused the biggest loss for the army since 1993, when the PKK rebels killed 33 unarmed soldiers.

Clashes between the PKK and the army have escalated since the summer.

The PKK listed as a terrorist organization by Turkey and much of the international community took up arms for Kurdish independence in southeastern Turkey in 1984, sparking a conflict that has claimed some 45,000 lives.

Turkey's last ground incursion into northern Iraq, an autonomous Kurdish region, was in February 2008, when the army struck against the Zap region.