Plankton Threatened by Ocean Acidification. Why that Matters 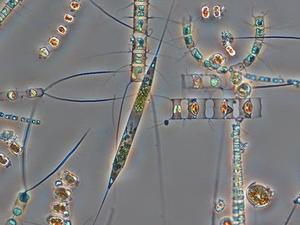 The balance of various plankton species will radically change as the world’s oceans increase in acidity over the next 85 years, according to a new study released this week.

By 2100, ocean acidification will have grown to such an extent that some species of phytoplankton “will die out, while others will flourish,” according to a report by the Massachusetts Institute of Technology, where experts teamed up with the University of Alabama to conduct the study.

That could be a big problem, given what scientists have recently learned about plankton's role in the global ecosystem. The tiny critters supply half of the planet's oxygen, microbial biologist Linda Amaral Zettler told The Christian Science Monitor in May.

The process of ocean acidification is linked to carbon dioxide. Our waters have already absorbed up to a third of manmade carbon dioxide emissions, according to researchers.

The report went on to say:

Since pre-industrial times, the pH of the oceans has dropped from an average of 8.2 to 8.1 today. Projections of climate change estimate that by the year 2100, this number will drop further, to around 7.8 – significantly lower than any levels seen in open ocean marine communities today.

Scientists have known the effect of ocean acidification on plankton for years, but more so in relation to climate change than population development. Lab and field experiments show that the chemical compound produced by plankton, known as DMSP, drops in more acidic environments, which in turn lowers the volume of particles that help seed marine clouds, reported the Monitor’s Pete Spotts.

A study in 2013 suggested that the microbes, affected by ocean acidification, “could raise average global temperatures by as much as 1 degree Fahrenheit above current estimates,” reported the Monitor.

Researchers in the latest study also looked at phytoplankton’s reaction to “other projected drivers of climate change, such as warming temperatures and lower nutrient supplies.” This found that most phytoplankton populations would head toward the poles as the planet warms, according to the MIT report.

But the biggest changes observed appear to be in response to ocean acidification since the upheaval in different plankton species is far greater than previously estimated, say experts.

“I’ve always been a total believer in climate change, and I try not to be an alarmist, because it’s not good for anyone,” said Stephanie Dutkiewicz, a principal research scientist in MIT’s Center for Global Change Science who led the study, according to MIT News. “But I was actually quite shocked by the results. The fact that there are so many different possible changes, that different phytoplankton respond differently, means there might be some quite traumatic changes in the communities over the course of the 21st century.”

The food web will be relatively rearranged, and the carbon cycle will also be affected, she added.