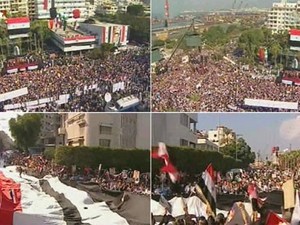 Syrian security forces and snipers Thursday killed three people, including a teenager, in the central region of Homs and the southern province of Daraa, two hotbeds of dissent, activists said.

"A 15-year-old minor was killed and three people were wounded by security forces during raids," in the town of Dael, near the southern city of Daraa, the Syrian Observatory for Human Rights said in a statement.

More than 5,000 people on Wednesday demonstrated in Dael calling for the fall of the regime of Syrian President Bashar Assad, the Observatory said, adding that 23 people were arrested in the town.

Further north, two civilians were killed in the region of Homs, one shot by sniper fire, the other by security forces, the Britain-based watchdog said.

The Local Coordination Committees, an activist network spurring protests on the ground, said security forces entered several towns to the east of Damascus looking for people "on the basis of lists."

State television, meanwhile, broadcast images of a huge pro-Assad rally in the coastal city of Latakia, saying the rally showed people's support for (Assad's) reform program and their rejection of foreign interference.

Assad on Wednesday received a delegation of Arab League ministers led by Qatar, which announced that a new meeting would take place on Sunday in a bid to find a political solution to the crisis.

The Arab League's visit, which sought to mediate between the regime and the opposition, coincided with a new wave of violence that left at least 27 people, including 11 military, dead in Syria, activists said.

The regime's brutal crackdown on protest has killed at least 3,000 people since mid-March, according to U.N. figures.

So does this mean that from now on Bashar will let his opponents also hold rallies without getting arrested, kidnapped, torture or murdered, in the name of the freedom of assembly he seems to love so much lately.

confirming a healthy civil war, which will lead to a pact of the mediterrenean countries

Gabby, what's going on? ASSad supporters seem to be amASSing in huge numbers. Is he going to fall 8 days ago as you had predicted? Can you check for updates with Dr. Falso, moulhim al thawrat? Do you think these people protesting are Iranians? Indians? Somalis? What? Please enlighten us my friend.

if the assad gvt was in a powerful position they wouldn t organize these rallies for their glory!
M8 all say that nothing is happening in syria and everthing is just fine... so they don t need these propagandist rallies if they were so sure of themselves...

I wonder what did the magnificent President Bashar Assad the president of Syria and all the Levant means when he says every couple of weeks that the revolt is over . I mean he's been saying this for seven month and don't get me wrong we all believe him every time he says but COME ON ! Even his beatitude SHN and the master of the game GMA repeated this, it makes them sound so foolish .. well more foolish that the usual .

What a coincidence that the first pro-Assad rallies in months start happening when the Arab league delegation is visiting.

Aha. So because the assad gvt was in a position.... as peace brilliantly points out... So is this gvt getting these people from among the opponents of the gvt? Where are they getting them from? Are they plastic manequins? Genius, 3an jad.

in case some never watch news or read history books: it is the common point between all dictatorships to have the capacity to mobilize thousands of people to demonstrate for their glory = just like being elected with 90% of the voices!!! ...
easy when people live in fear of being imprisonned if they don t go to the demonstration...just look how well organized these demonstrations are! big pictures of the dictator hanging huge flags and so on...a real theatre stage
it is certainly not a spontaneous demonstration

so please spare us the we-love-our-dictator thing... and just revise your contemporary history books!