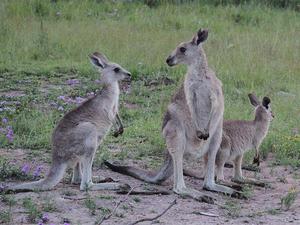 The discovery of a genetically distinct group of eastern grey kangaroos sheds light on how they survived aeons of climate-induced expansion and contraction of their grassland habitat, say researchers.

The population, unique to the Sunshine Coast in Queensland, formed as a result of a larger population becoming fragmented due to climate-induced changes in vegetation, they report in a recent issue of PLOS ONE.

"They're not a different species," says senior author, Dr Jenny Seddon, a geneticist at the University of Queensland.

"They don't look different and can still interbreed, although there might be something that is adaptively different about them."

Kangaroo grassland habitats expanded during ice ages but shrank when the climate warmed and wetter vegetation like rainforest took over.

To date, scientists have not understood how kangaroos managed to be resilient in the face of such changes.

Did they move somewhere else or could they just survive by retreating to the reduced habitat areas.

One way to answer this question is to use genetics to study the movement of animals in response to past climate change.

Scientists expected that all the eastern grey kangaroos in Queensland would, however, be more or less genetically the same, given the large distances these animals can move.

But Seddon and colleagues found otherwise.

"Kangaroos from the Sunshine Coast region in southeast Queensland were quite different from the other kangaroos in Queensland," says Seddon.

She says this suggests that after the last ice age when rainforest expanded, it would have prevented kangaroos in this area on the Sunshine Coast from mixing with others in Queensland.

"A little pocket of them would have been left trapped," says Seddon. "They would have become isolated from the rest."

This not only explains why they are genetically distinct, but tells scientists how such species survived a constant changing habitat over millennia of natural climate variability.

"Kangaroos have managed to survive in small pockets of suitable habitat," says Seddon.

While this may bode well for their future survival, Seddon says fragmentation of grassland habitats by urban development is now another threat eastern greys must contend with.

"It's going to be harder for them to find those suitable habitats to seek refuge in," she says.