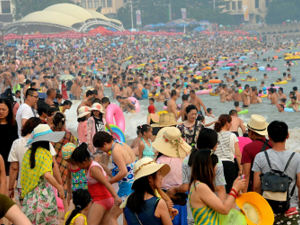 A recent study led by Georgina Mace, ecosystem professor at University College London, indicated that governments across the world have failed to grasp the risk that population booms in coastal cities pose as climate change continues to cause rises in sea levels and extreme weather events. Mace is director of the UCL Centre for Biodiversity and Environment Research.

Mace says population growth in coastal areas can lead to big increases in exposure to extreme weather. The biggest direct effect of projected climate change is heat waves. The number of people dying from extreme heat could increase twelvefold by the end of this century, as a result of global warming combined with increasing numbers living in affected areas.

“People are increasingly living in the wrong places, and the demographic shift in China is enormous. China has a lot of old people who are vulnerable to extreme weather,” says Mace.

A report from China’s National Bureau of Statistics showed South China’s Guangdong province was the most popular immigration destination, with more than 20 million people from other provinces residing there in 2010, and central China’s inland province of Henan had the biggest population migration, with more than 10 million people from there living in other regions in 2010.

According to the statistics bureau in Shanghai, the city had more than 24 million residents in 2014, with about 10 million having migrated from other provinces. A report released in July by the municipal government showed 28.8% of Shanghai residents are over age 60. Jiang Rui, vice-director of Shanghai’s civil administration, says in the report that Shanghai is now facing the problem of a rapidly ageing society. By the end of last year, more than 200 million Chinese citizens, 15.5% of the total population, were older than 60, according to a report from the national health and family planning commission.

The commission also released a report in July indicating that by 2030, China will have 230 million rural residents who have relocated to urban areas and the urbanisation rate will reach 70%.

Increased urbanisation will also exacerbate the effects of climate change, particularly among elderly citizens who are more vulnerable to extreme weather, Mace said recently at the release of the latest climate change report commissioned by the UK Foreign and Commonwealth Office.

The report, drawn up by experts from UK, the United States, China and India, demonstrated risks triggered by climate change, including extreme weather and social instability, and also stressed the potential impact on coastal areas caused by rising sea levels

“The reason we chose to work with China is very much because of the population factor. The eastern coastal region is highly populated, and the sea level is rising. That could be a big challenge,” says David King, the UK foreign secretary’s special representative for climate change, who led the project.

Mace and her research group recommended that big engineering projects, including sea walls to prevent flooding or wells in areas prone to drought, should be combined with natural ecosystem-based approaches such as re-establishing flood plains, planting vegetation and protecting coastlines with mangrove forests.

“It is just about getting the right infrastructure,” says Mace. “It needs advance planning to build the coastal cities more hazard-proof. The increased mortality from heat waves in Russia and France was because people were living in houses that are poorly designed.”