Orange Sludge from Colorado Mine Spill Heads down River 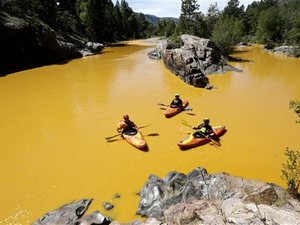 A plume of orange muck from a large mine waste spill in Colorado has drifted about 55 miles (90 kilometers) downriver and is closing in on New Mexico, prompting communities to take precautions until the sludge passes.

Officials emphasized that there was no threat to drinking water. But downstream water agencies were warned to avoid Animas River water until the plume passes, said David Ostrander, director of the Environmental Protection Agency's emergency response program in Denver.

The EPA said that a cleanup team was working with heavy equipment Wednesday to secure an entrance to the Gold King Mine. Workers instead released an estimated 1 million gallons (3.79 million liters) of mine waste into a local creek.

"The project was intended to pump and treat the water and reduce metals pollution flowing out of the mine," agency spokesman Rich Mylott said in a statement.

Officials weren't sure how long it would take the plume to dissipate, Ostrander said. The acidic sludge is made of heavy metal and soil, which could irritate the skin, he said.

The EPA was testing the plume to see which metals were released.

As the plume headed toward New Mexico, that state's governor said the EPA waited too long to tell her about the problem.

La Plata County health officials warned rafters and others to avoid the water, which was the backdrop for parts of the movie "Butch Cassidy and the Sundance Kid" and is popular with boaters.

The impact on wildlife wasn't clear. Colorado Parks and Wildlife was placing cages containing fish in the Animas River to monitor what happens to them, spokesman Joe Lewandowski said.