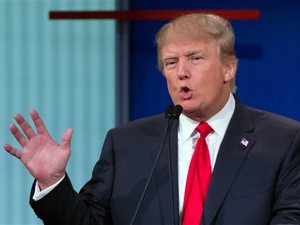 Republican presidential frontrunner Donald Trump on Sunday refused to apologize for a crude attack on a female Fox News journalist that sparked widespread outrage, insisting he was misunderstood.

The brash billionaire -- who is leading a packed Republican field of White House hopefuls -- found himself at the center of controversy after seeming to suggest that Megyn Kelly, one of the moderators of last week's presidential debate, asked him tough questions because she was menstruating.

But on Sunday, Trump said only "sick" people or a "deviant" would have concluded he was talking about Kelly's period.

"I cherish women. I want to help women," Trump said in a phone interview with CNN's "State of the Union" news program.

"Who would make a statement like that? Only a sick person would even think about it."

When asked why many of his fellow candidates and conservative pundits had reached the same conclusion about his comment, Trump replied: "They want to be politically correct. They want to get points. I'm leading in the polls."

Trump nevertheless did not offer an apology.

He said only that he had "nothing against" Kelly -- and then he doubled down on his criticism of her, again saying she had asked him "unfair" questions during the debate.

In an interview with Fox News before Trump's "blood" comment, Kelly appeared unfazed by the debate dust-up.

"He felt attacked. It wasn't an attack. It was a fair question. But I get it. He's in the arena and so am I. It's ok with me that there is some consternation. He will get over that," she said.

When asked about being attacked, she said: "I'm a big girl. I can take it."

Trump's top political advisor Roger Stone left the campaign on Saturday, saying on Twitter he disagreed with the "diversion to food fight with @megynkelly."

Trump's adversaries seized the opportunity to score points against the unlikely frontrunner.

"There's no excuse for this," former Hewlett-Packard chief executive Carly Fiorina -- the only woman in the Republican field -- told Fox News Sunday.

"You don't get things done by insulting people."

Rand Paul, who was quick to challenge Trump in the debate on Thursday night, hit out at him again on Sunday.

"I don't think we should reward vulgarity. I don't think vulgarity equates to insight. Because you can call someone stupid or fat, is that really what we're going to make the decision on for who is going to be our nominee?" he told Fox News.

"In no way do I advocate saying mean things about people. That has nothing to do with political correctness," he said on CBS's "Face the Nation."

Several of the candidates, including Fiorina and Jeb Bush, have asked Trump to apologize.

Other Republican candidates, like Ohio Governor John Kasich, refused to be drawn into a controversy seen as damaging the party's chances with women voters.

Trump's history of misogynist remarks has made for incendiary electoral fodder since Thursday's debate.

"Only Rosie O'Donnell," Trump shot back, referring to the comedienne and presenter with whom he has had a lengthy public spat.

Recalling the exchange on ABC's "This Week," Trump said the question was "very, very nasty" but he appeared to take comfort in the audience's reaction to his retort.

"It was the biggest combination of laughter and applause. The place went crazy."

In his multiple interviews on the Sunday talk shows, Trump also took aim at Bush, who had himself been in hot water over a comment on funding for women's health.

It was unclear what impact the latest Trump controversy will have on his electoral fortunes.

Before the debate, he was leading in national Republican polls with 24 percent to Bush's 13. He had posted even stronger showings in state polls in New Hampshire, South Carolina and Georgia and was in a virtual tie with Bush in his home state of Florida.

Past controversies over Trump's disparaging remarks about Mexican immigrants, the wartime record of Republican John McCain and the intelligence of his Republican rivals have so far fueled his rise in the polls.

"We're doing fantastically well with the campaign. The numbers are incredible," Trump said on ABC's "This Week."

"It's full speed ahead. I'm having a good time. I really love it."