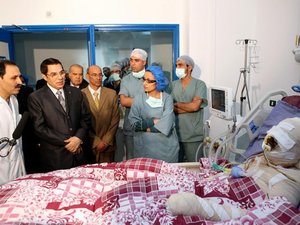 The Arab Spring revolutions were sparked by Bouazizi, who set himself alight on December 17 in the city of Sidi Bouzid and died in hospital two weeks later.

His actions lead to a popular uprising in Tunisia that brought down the regime of Zine el-Abidine Ben Ali and spread through the Arab world.

Mahfouz founded the 6 April youth movement in Egypt that inspired thousands of Egyptians to protest in Cairo's Tahir Square, leading to the downfall of veteran president Hosni Mubarak.

The prize also honors two Syrians who are part of the current uprising in Syria: Zeitouneh, a 34-year-old lawyer leading the groups coordinating the revolt against Presidnet Bashar al-Assad, and Farzat, a caricaturist who was badly beaten in August.

"I share this award with all who are deprived of freedom and democracy," said Farzat, who spoke with AFP by telephone from Kuwait, adding that the prize "spreads hope for the future."

"Freedom is a message that crosses generations. I dedicate this award to all the martyrs who gave their life for freedom and who have learned the culture of liberty," he added.

"I salute them, as well as those who take to the streets, everywhere in the world, searching freedom, democracy and dignity," the cartoonist continued.

Past winners of the prize include anti-apartheid icon Nelson Mandela and former U.N. chief Kofi Annan.