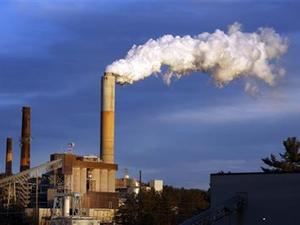 Aiming to jolt the rest of the world to action, President Barack Obama moved ahead Sunday with even tougher greenhouse gas cuts on American power plants, setting up a certain confrontation in the courts with energy producers and Republican-led states.

In finalizing the unprecedented pollution controls, Obama was installing the core of his ambitious and controversial plan to drastically reduce overall U.S. emissions, as he works to secure a legacy on fighting global warming. Yet it will be up to Obama's successor to implement his plan, which reverberated across the 2016 presidential campaign trail.

Opponents planned to sue immediately, and to ask the courts to block the rule temporarily. Many states have threatened not to comply.

The Obama administration estimated the emissions limits will cost $8.4 billion annually by 2030. The actual price won't be clear until states decide how they'll reach their targets. But energy industry advocates said the revision makes Obama's mandate even more burdensome, costly and difficult to achieve.

Last year, the Obama administration proposed the first greenhouse gas limits on existing power plants in U.S. history, triggering a yearlong review and more than 4 million public comments. On Monday, Obama was to unveil the final rule publicly at an event at the White House.

"Climate change is not a problem for another generation," Obama said in a video posted to Facebook. "Not anymore."

The final version imposes stricter carbon dioxide limits on states than was previously expected: a 32 percent cut by 2030, compared to 2005 levels, the White House said. Obama's proposed version last year called only for a 30 percent cut.

Immediately, Obama's plan became a point of controversy in the 2016 presidential race, with Hillary Rodham Clinton voicing her strong support and using it to criticize her GOP opponents for failing to offer a credible alternative.

"It's a good plan, and as president, I'd defend it," Clinton said.

On the Republican side, Marco Rubio, a Florida senator, predicted increases in electricity bills would be "catastrophic," while former Florida Gov. Jeb Bush called the rule "irresponsible and overreaching."

"Climate change will not be solved by grabbing power from states or slowly hollowing out our economy," Bush said.

Obama's rule assigns customized targets to each state, then leaves it up to the state to determine how to meet them. Prodded by Senate Majority Leader Mitch McConnell, R-Ky., a number of Republican governors have said they simply won't comply. If states refuse to submit plans, the EPA has the authority to impose its own plan, and McCarthy said the administration would release a model federal plan that states could adopt right away.

Another key change to the initial proposal marks a major shift for Obama on natural gas, which the president has championed as a "bridge fuel" whose growing use can help the U.S. wean itself off dirtier coal power while ramping up renewable energy capacity. The final version aims to keep the share of natural gas in the nation's power mix at current levels.

In an attempt to encourage earlier action, the federal government plans to offer credits to states that boost renewable sources like wind and solar in 2020 and 2021. States could store those credits away to offset pollution emitted after the compliance period starts in 2022.

Twenty to 30 states were poised to join the energy industry in suing over the rule as soon as it's formally published, said Scott Segal, a lobbyist with the firm Bracewell and Giuliani who represents utilities. The Obama administration has a mixed track record in fending off legal challenges to its climate rules. GOP leaders in Congress were also weighing various legislative maneuvers to try to block the rule.

The National Mining Association lambasted the plan and said it would ask the courts to put the rule on hold while legal challenges play out. On the other end of the spectrum, Michael Brune, the Sierra Club's executive director, said in an interview that his organization planned to hold public rallies, put pressure on individual coal plants and "intervene as necessary in the courts" to defend the rule.

By clamping down on emissions, Obama is also working to increase his leverage and credibility with other nations whose commitments he's seeking for a global climate treaty to be finalized later this year in Paris. As its contribution to that treaty, the U.S. has pledged to cut overall emissions 26 percent to 28 percent by 2025, compared to 2005.

Power plants account for roughly one-third of all U.S. emissions of the heat-trapping gases blamed for global warming, making them the largest single source.