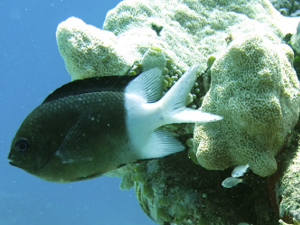 The genetic makeup of fish will be crucial in determining whether they will be able to deal with the world’s rapidly warming oceans, researchers have discovered.

Scientists have discovered that certain fish can adjust to higher water temperatures over several generations, but only if they fully utilize aspects of their genetic makeup.

In a four-year study conducted by Queensland’s James Cook University and Saudi Arabia’s King Abdullah University of Science and Technology, researchers analysed how a handful of spiny damsel fish coped with rising temperatures.

A total of 53 genes were identified as useful in dealing with higher temperatures, with those relating to energy production, and immune and stress responses, the most important.

The reef fish able to deal with the warmer temperatures, which ranged from 1.5C to 3C warmer than their normal environment, were those that used these key genetic traits.

“If they don’t do that as it warms, their capacity to get oxygen is affected, which impacts their ability to avoid predators, slows their swimming speed and hinders their ability to get food,” said Professor Philip Munday, a researcher at James Cook University.

“It does give us a pointer as to which biological processes will be important for fish that cope with climate change. But there will certainly be trade-offs – fish may be able to perform in some traits but not in others, so it may mean they won’t be able to grow so fast under warmer conditions.”

Munday said fish will have “far less control” over other changes to their environment, such as the diminishing coral reef habitats.

Climate change is considered the leading threat to coral ecosystems such as the Great Barrier Reef. As the water warms and acidifies, corals find it harder to calcify and form reef structures. Under high temperatures, corals can turn deathly white and die.

Fish are also affected by climate change, experiencing changes to their sense of smell and agility.

About 90% of the excess carbon dioxide emitted by human activity in recent decades has been absorbed by the oceans. This is causing changes in the ecology of the oceans, as well as triggering thermal expansion of the water, which will fuel sea level rises.