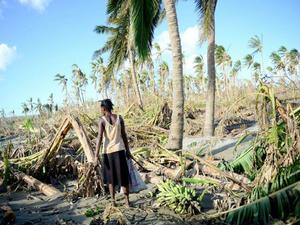 More than a dozen small island nations made an urgent appeal to the UN Security Council for help in combatting climate change, which they said poses a threat to their very existence.

The Council -- more typically a forum for heated debates on the plight of refugees in Syria or efforts to stem the war in Ukraine -- heard pleas from ministers and ambassadors of diminutive nations like Fiji, Samoa and Caribbean countries like St. Vincent and the Grenadines.

The group -- dubbed the Small Island Developing States (SIDS) -- represent the farthest-flung reaches of Africa, Asia and the Caribbean.

But it had one singular plea -- financial and technical assistance to help them avoid becoming washed away in the rising tides and powerful storms caused by global warming.

The president of the Republic of Kiribati, Anote Tong, said the plight of smaller islands for too long has been at the bottom of the list of priorities of the United Nations and other global organizations.

He expressed hope that Thursday's concerted appeal by the SIDS nations would help change that.

"Can we as leaders return today to our people and be confident enough to say ... that no matter how high the sea rises, no matter how severe the storms get, there are credible technical solutions to raise your islands and your homes and the necessary resources are available to ensure that all will be in place before it is too late?" Tong asked the Council.

The island nations raised a raft of other security related issues, including piracy on the high seas, but focused largely on dangers posed by global warming.

Tong's tiny nation of about 100,000 people has been acutely affected by climate change.

Kiribati consists of about 30 atolls, most of which sit just several feet (a few meters) above sea level.

The low-lying nation suffers from a range of environmental problems linked to climate change, from storm surges to flooding to water contamination.

The situation is so dire that the government is mulling the idea of relocating the entire population, amid fears that Kiribati one day in the not too distant future may find itself completely underwater.

Others at the meeting pointed to the example of Vanuatu, which was largely flattened in March by Cyclone Pam -- the worst natural disaster ever to hit the South Pacific Ocean nation.

According to a United Nations World Risk Report published last year, Vanuatu, still recovering from the devastating storm of just four months ago, is the country at greatest risk of experiencing natural disasters due to climate change -- including severe cyclones and extremes of drought and flood.

The SIDS nations said they have made appeals in the past -- mostly in vain -- for global powers to address the unique and acute impact they face from climate change.

The difference now, they said, is that New Zealand -- which has long been sympathetic to the plight of smaller island nations -- currently wields the gavel in the rotating presidency of the 15-member Security Council.

"New Zealand's use of its tenure as president of the UNSC to highlight SIDS is of particular importance given the council's historical indifference or antipathy to Small Island States and our peace and security challenges," said Camillo Gonsalves, foreign minister of Saint Vincent and the Grenadines.

Until now, Gonsalves said "small island states, our issues and perspectives, have been, by and large, excluded from serious and sustained consideration by the Security Council."

The United Nations has given 52 nations or territories -- encompassing a population of some 50 million people -- the designation of small island developing states. Of those, 37 are UN members.

He said their plight needs to be on the agenda at 46-nation climate change talks to be held in Paris in December.

"We need a meaningful and universal and global climate agreement in Paris in December," Ban told the gathering.

"The issues facing SIDS are global challenges. They are our collective responsibility," he said.

"But Small Island Developing States do not have the resources to combat such threats by themselves," the UN leader said.

"Only through global partnership can we secure their sustainable and peaceful future."