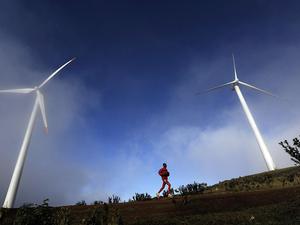 Kenya has pledged to cut its carbon emissions 30% below business-as-usual levels by 2030, ahead of a landmark UN climate summit in Paris later this year.

The East African country is a very small carbon emitter in global rankings, on a par with Singapore and Mongolia, but the move was hailed by campaigners as evidence that developing countries could develop without fossil fuels.

In its submission to the UN ahead of a visit to the country by Barack Obama, the Kenyan government said it would meet the target by expanding solar, wind and geothermal power, and bring forest cover up to 10% of the country while reducing reliance on wood fuel.

Mohamed Adow, a Kenyan climate expert and senior climate adviser to Christian Aid, said it was significant step forward: “Kenya has submitted its commitment much sooner than many richer countries, demonstrating the kind of ambition other such countries should be aiming for.

“The country is investing in renewable energy and is demonstrating African countries do not need to be slaves to fossil fuels as they plot their future development out of poverty. But it will need financial and technological support from richer countries.

Professor Shem Wandiga, director of the University of Nairobi’s Institute of Climate Change and Adaptation, said he thought the pledge was fair and achievable.

Several dozen countries representing 59% of world carbon emissions have submitted their pledges, known as Intended Nationally Determined Contributions in the jargon of the climate talks, to the UN ahead of the Paris summit.

Kenya estimated it will need $40bn over the next 15 years, some of it in the form of foreign aid, to fully implement its climate mitigation and adaptation plans.

Prof Wandiga said: “This is an estimate, the actual cost is still to be worked out.”