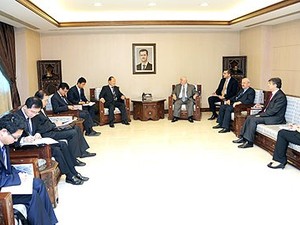 Muallem and envoy Wu Sike met in Damascus for talks during which they spoke of "the relations of solid friendship" between their countries.

The Syrian minister explained "the current situation, measures taken by Syrian leaders to respond to the legitimate demands of its citizens, and efforts made to implement reforms," the news agency said.

China's envoy reaffirmed the "pursuit of cooperation between the two countries within international bodies" as well as its "opposition to attempts to interfere in Syrian affairs."

Syria has been shaken since mid-March by an unprecedented protest movement against the regime of President Bashar al-Assad. More than 3,000 people have been killed by the regime's crackdown on the protests, according to the United Nations.

Russia and China -- permanent members of the U.N. Security Council -- on October 4 vetoed a Western proposed resolution threatening the Syrian leadership with "targeted measures" unless it halted the bloody repression of protesters.

Obviously... since they both share the same "values" of oppression and unchecked criminality against their own peoples... I'm sure the Chinese Envoy even tipped the Assad Regime on a few "tricks" to violently put down any peaceful protest such as the Tiananmen massacre (which was basically brutally killing peaceful protestors in Cities throughout the Chinese Mainland) on the watch of then Chinese “Paramount Leader” Deng Xiaoping (Makes you think where the idea of a “Dear Leader” in N Korea and “Supreme Leader” in Iran was "divinely" inspired from doesn't it?), I'm sure they have a lot of horror stories to exchange and amuse each other with just before Halloween..