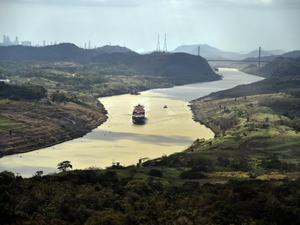 Panama's government has declared a state of emergency as it faces a drought that has prompted water restrictions, depleted reservoirs and affected shipping through its bustling canal.

The government blamed the El Nino weather phenomenon for the major drought. The state of emergency declared Tuesday also sets up a government board tasked with rushing to deliver a water security plan in under four months.

"El Nino" refers to the abnormal warming of surface waters in the tropical sections of the Pacific Ocean every three to five years that can have wide-ranging impacts on regional climate.

Climatologists began observing the most recent El Nino several months ago, and some fear that because of global warming the phenomenon will hit many areas with increasing frequency and greater destructive potential in coming years.

The government must deliver "needed steps ... to develop water reserves to avoid shortages for people's consumption and for food security in the Central American nation" caused by the drought, it warned.

For now, authorities have barred use of drinking water to water lawns, gardens and golf courses.

It also stopped issuing permits that allow people to burn branches, brush and other natural waste for fear of fueling wildfires.

Last week, authorities said the canal, which connects the Pacific and the Atlantic through the Caribbean, would temporarily limit the size of ships using the waterway due to the drought.

The Panama Canal Authority said the maximum ship draft will be cut to 11.89 meters (39 feet) from September 8, affecting 18.5 percent of vessels that normally transit the link between the Atlantic and Pacific oceans.

A ship's draft is its depth in the water, and changes as the vessel becomes heavier or lighter.

The canal authority said further restrictions could be imposed on September 16 if weather conditions do not change.

The Panama Canal handles five percent of global shipping, but may need to upgrade its century-old infrastructure in the face of rival bids for market share from Egypt's Suez Canal and a new Nicaraguan canal being planned by a Chinese company.

Originally scheduled for completion last year, a more than five-billion-dollar canal upgrade is now only expected to be ready in April 2016.

Canal administrator Jorge Quijano said the month of June and the first half of July were the driest period in 102 years.

Water levels in the lakes that feed the canal have dropped sharply as well.

The emergency is meant to last until some two months after the World Meteorological Organization's data on El Nino shows that temperatures in the tropical equatorial Pacific have decreased to a target level.