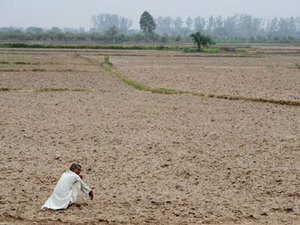 India has retained its forecast for this year's monsoon rains at 88 percent of the long-period average as a strengthening El Nino weather pattern is likely to trim rainfall in August-September to 84 percent, raising fears of the first drought in six years.

In a country where nearly half of farmland lacks irrigation, poor rainfall in the second half of the June-September monsoon season may stoke food inflation and limit ability of India's central bank to cut lending rates.

Food prices are a politically sensitive issue in India, where more than a quarter of its population of 1.2 billion people live on 74 cents or less each day. Rising food prices have already pushed the country's June consumer inflation to an eight-month high.

"Poor rainfall in southern and western parts of the country has affected the planting of pulses, sugar cane and vegetables," said Harish Galipelli, head of commodities and currencies at Inditrade.

India has received 6 percent lower rainfall than usual, but in some areas rainfall deficit is as high as 57 percent, India Meteorological Department (IMD) data showed.

"In August we are estimating the country will get 92 percent rainfall due to the El Nino effect," Sharma told Reuters.

El Nino, or a warming of sea-surface temperatures in the Pacific, can prompt dry spells in Southeast Asia and Australia and heavy rains in South America, curbing food crop output.

Rainfall of less than 90 percent is considered to result in a drought year, although the latest prediction has an error margin of 4 percentage points.

Although agriculture accounts for around 15 percent of a $2 trillion economy, three-fifths of India's population depend on farming for their livelihoods.

The country has ample stocks of rice, wheat and sugar, which will limit the impact of poor rains, industry officials said.

Monsoon rains covered the entire country ahead of schedule this year, accelerating the sowing of summer-sown crops. But a prolonged dry spell in some regions has threatened to wilt planted crops.

Farmers depend on September rainfall for the cultivation of winter crops.

"Poor rainfall in September can hit sowing of winter crops like wheat, rapeseed and chickpea," said a Mumbai-based dealer with a global trading firm.