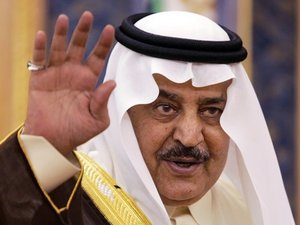 Nayef -- who has been interior minister for nearly four decades and led a crackdown on al-Qaida in the kingdom -- succeeds prince Sultan bin Abdul Aziz, who died last week in New York and was buried Tuesday in Riyadh.

The prince was also appointed deputy prime minister, but there was no mention of who would take over the post of defense minister, left vacant by the death of Sultan.

Nayef was widely seen as the most likely candidate for the appointment even before the decree was announced.

Seen as more conservative than the 87-year-old king, he likes to describe himself as a soldier under the command of the Saudi monarch.

Observers are now waiting to see who eventually gets the defense portfolio, and in particular to see if it will go to a younger member of the royal family.

For the moment, the key ministerial posts are occupied by the sons of the kingdom's founder King Abdul Aziz, all of whom are in their 70s or 80s and some of whom have health problems.

King Abdullah himself only left hospital in Riyadh on Saturday after a back operation and appeared tired and frail at Tuesday's funeral.

In November 2010 he underwent surgery for a debilitating herniated disc complicated by a blood clot that put pressure on his spine, and he underwent further surgery in December.

Prince Nayef had tried in vain to persuade the king not to attend the funeral because of his concern for his health, the official Spa news agency reported.