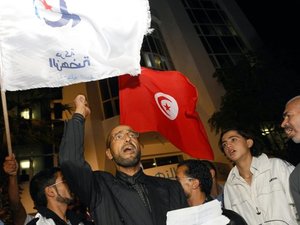 Violent protests broke out in the central town of Sidi Bouzid, where the uprising started last December, after the tally was announced, witnesses and the interior ministry said.

The Islamist Ennahda party now has the single-biggest share of the assembly that will rewrite the constitution, appoint a president and form a caretaker government, elections chief Kamel Jendoubi told journalists in Tunis.

He also announced the invalidation of six candidates' lists of the Petition for Justice and Development, including one in Sidi Bouzid, notably due to "financial irregularities".

The group, led by Hechmi Haamdi, a rich London-based businessman said to have close ties to Ben Ali, nevertheless came in fourth place with 19 assembly seats.

Following the announcement of the invalidations however, Haamdi said he was withdrawing his candidates from the assembly.

Witnesses said more than 2,000 young people marched on Ennahda's headquarters in Sidi Bouzid when the results were announced abd pelted security forces with stones. An Agence France Presse correspondent said they broke doors and windows of the Ennahda building and burnt tyres on the town's main road.

According to the TAP news agency, "acts of destruction and pillaging also took place at the municipality".

Witnesses reported a similar protest in the town of Regueb, some 50 kilometers from Sidi Bouzid, where a gunshot was fired at an Ennahda office.

On the main road in the capital Tunis however, the results were met with a cacophony of car hooters blaring, as people hung out of car windows singing and waving Ennahda and Tunisian flags.

The ISIE electoral commission said political groups had two days to lodge challenges to the results.

Ennahda was banned under Ben Ali's regime and only registered as a political party in March.

But on Wednesday, preempting the official news of its victory, Ennahda leader Rached Ghannouchi said they had started coalition negotiations and intended to form a new government "within no more than a month."

The party, which presents itself as having a moderate Islamist agenda, has put forward its number two, Hamadi Jebali, as candidate for prime minister.

The new assembly will decide on the country's system of government and how to guarantee basic liberties, including women's rights, which many in Tunisia fear Ennahda would seek to diminish despite its assurances to the contrary.

Analysts have said that Ennahda, even in a majority alliance, would be unable to "dictate" any program to the assembly.

They argue that it will have no choice but to appease its coalition partners, a moderate-minded society, and the international community on whose investment and tourism the country relies heavily.

Leftist parties may yet seek to form a majority bloc against Ennahda, which said it had met bankers and stockbrokers earlier Thursday to "reassure" them.

The electoral system was designed to include as many parties as possible in drafting the new constitution, expected to take a year, ahead of fresh national polls.

Coalition negotiations are expected to be complicated, with all of Ennahda's potential partners on the leftist, secular side of the spectrum.

Ennahda's Jebali on Wednesday signaled his intention to form an executive with the highest scoring leftist parties, singling out the CPR and Ettakatol.

He also stressed they had no intention "to impose a constitution ... that abrogates the freedom of belief, individual liberties, the legal position of women and their place in society.

"Is it reasonable to paralyze a sector as vital as tourism by interdicting alcoholic beverages and bathing suits?" he asked.

"These are individual liberties guaranteed for foreigners as much as for Tunisians."

Tourism represents about seven percent of GDP -- bringing in 780 million euros from January to September 2011, a drop of 39.4 percent from 2010.

The CPR has defended its coalition talks with the Islamist party.

"No, no, no it is not the devil and we do not make pacts with the devil," party leader Moncef Marzouki said on Wednesday.

"One must not take them for the Taliban of Tunisia. It is a moderate part of Islam."

The Progressive Democratic Party, polled in second place before the election, came fifth with 17 seats.