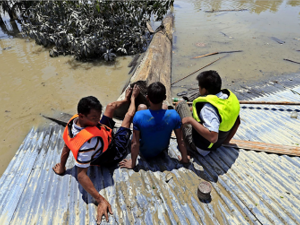 Heavy monsoon rains have continued to lash much of southern Asia, threatening further casualties and more destruction after a week of lethal floods and landslides.

More than 100 people have died and up to 1 million fled their homes as land from Pakistan to Burma was deluged.

In Burma, opposition leader Aung San Suu Kyi visited one of the country’s many flood-hit areas on Monday, raising her profile amid a national disaster that could have consequences in the general election due later this year.

Thein Sein, the president, has declared four areas of the country disaster zones, after slow and inefficient relief efforts were criticised in the press and on social media.

In India, the chief minister of West Bengal, in the east of the country, described the situation as beyond control.

Local officials said 48 people are thought to have died in the state and hundreds of thousands of villagers have been taken to relief camps. The death toll is thought likely to rise.

Another 28 deaths were reported in Rajasthan, western India, where rescue workers evacuated nearly 1,000 people to higher ground. Five people were killed in the eastern state of Odisha.

The annual monsoon season in the region runs from June to the end of September but, though a lifeline for farmers, often causes hundreds of deaths as well as severe damage to homes and food crops.

Poor infrastructure and limited search and rescue capabilities routinely hamper relief efforts. Roads, phone lines and electricity are knocked out by rising waters while poorly maintained sewers overflow and contaminate drinking water supplies. Some villages are cut off for weeks.

India, which receives nearly 80% of its annual rainfall from June to September, has seen a series of disasters caused by excessive rain. In 2013, floods in the mountainous north killed an estimated 6,000 people. Last autumn, a devastating flood hit the disputed region of Kashmir.

In 2010, Pakistan suffered massive floods, killing more than 1,500 people and causing damage estimated at between £7bn and £30bn.

This year, the problems have been particularly severe in Burma. Thousands of victims in the poor, unstable state were already in camps for the displaced, including one in Kalay, Sagaing region, where residents described powerful flood waters swamping homes within hours.

“We’ve lost all that we have. Our house is still under water,” Htay Shein, 62, told Agence France-Presse from a temporary shelter in Kalay. “We have seen floods, but never anything like this before. This year is the worst.”

The United Nations warned swollen rivers threaten more areas of the country, adding it could be days before the true extent of the disaster emerges.

“Logistics are extremely difficult. Assessment teams are having a hard time reaching affected areas,” said Pierre Peron, Myanmar spokesman for the UN Office for the Coordination of Humanitarian Affairs.

Rains have also battered the western state of Rakhine, which already hosts about 140,000 displaced people, mainly Rohingya Muslims, who live in exposed coastal camps following deadly 2012 unrest between the minority group and Buddhists.

Pakistan, which has experienced deadly floods at similar times every year since 2010, has seen 116 people die so far. Many casualties were in remote north-western areas.

Dozens have also perished in Nepal following floods and landslides.