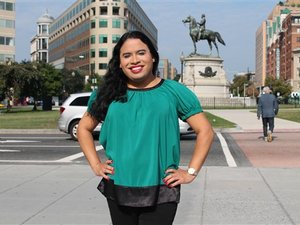 The White House said Tuesday it had hired its first openly transgender official, a move which supporters said underscored the administration's drive against inequality.

Officials said former activist Raffi Freedman-Gurspan began work on Tuesday in a team that recruits personnel to serve the president.

"Her commitment to bettering the lives of transgender Americans, particularly transgender people of color and those in poverty, reflects the values of this administration."

Freedman-Gurspan will act as outreach and recruitment director in the White House personnel office.

She previously worked on improving conditions for transgender prisoners, policing, the detention of transgender immigrants and violence against transgender women.

"A transgender person was inevitably going to work in the White House," said Mara Keisling of Freedman-Gurspan's former employer the National Center for Transgender Equality.

"That the first transgender appointee is a transgender woman of color is itself significant."

The Obama administration has supported efforts to advance the rights of gay, lesbian, bisexual and transgender Americans, amid conservative opposition.

After years of sitting on the fence, Obama himself has voiced support for gay marriage and praised a Supreme Court ruling those unions legal.