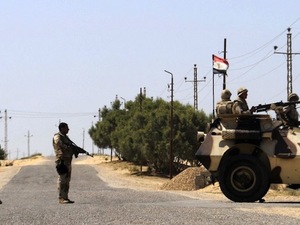 Gunmen in Egypt boarded a bus carrying Palestinians from Cairo to Gaza and seized four of the passengers before letting the others continue, Hamas officials in the strip said early Thursday.

Interior ministry spokesman Iyad Bezem said in a statement that the kidnapping took place late Wednesday night in the troubled northern Sinai region as the bus headed for the Rafah border crossing into Gaza.

He said that his ministry had contacted its Egyptian counterpart "to establish the circumstances of what happened and demand that the Egyptians work to protect the victims and release them".

A Hamas foreign ministry statement "condemned...the kidnapping of a number of Palestinians".

Officials said that some of the passengers who arrived safely described the assailants as wearing "Pakistani-type" clothes and holding laptop computers on which they checked passengers' names before separating the four from the group and taking them away.

North Sinai, where Egyptian security forces are fighting an Islamist insurgency, is a bastion of the Egyptian affiliate of the jihadist Islamic State (IS) group, which is spearheading an insurgency that has swelled since the army's ouster of president Mohamed Morsi in July 2013.

Formerly known as Ansar Beit al-Maqdis, the key jihadist group in the region changed its name to "Sinai Province" when it pledged allegiance to IS in November.