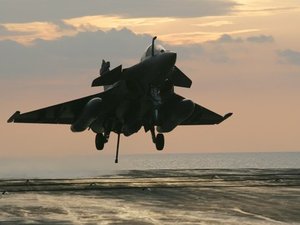 NATO formally decided to end its seven-month mission in Libya on October 31, a diplomat said Friday, despite calls from the country's new rulers for air patrols to continue until the end of the year.

Alliance warplanes would wind up the mission on Monday after flying more than 26,000 sorties and bombing almost 6,000 targets in an operation that helped a ragtag rebel force oust veteran ruler Moammar Gadhafi.

The alliance had made a preliminary decision last week to end operations on October 31 after judging that civilians were essentially safe from attacks following Gadhafi's death and the fall of Sirte.

The formal decision on Friday came one day after the U.N. Security Council unanimously voted to end the mandate that authorized military action in Libya from 11:59 pm Libyan time (2159 GMT) on October 31.

The resolution, Hague said on Thursday, "is another significant milestone towards a peaceful, democratic future for Libya."

The operation had divided the United Nations, with Russia, China, Brazil, India and South Africa accusing NATO of breaching the mandate.

Western allies are now looking at how they can assist the new regime in Libya.

NATO Secretary General Anders Fogh Rasmussen has offered to help the new Libyan leaders reform the country's security sector, but the alliance has repeatedly ruled out sending troops on the ground.

An alliance official said some allies could offer to provide the NTC help in "air space management" and to control borders, but it would be outside the NATO umbrella.

Jalil's fears were heightened by reports that Gadhafi's former intelligence chief Abdullah al-Senussi, who fled Libya, had passed from Niger into Mali.

"We did hear, and more or less it is confirmed, that Abdullah Senussi has crossed into Niger," NTC vice chairman Abdel Hafiz Ghoga said on Thursday.

It was not known if Gadhafi's son and heir-apparent Seif al-Islam was with him. Seif was earlier reported to be hiding in Niger after his father was killed in Sirte on October 20.

While NATO has steadfastly denied targeting Gadhafi during the campaign, it was an alliance air strike that hit his convoy as it fled Sirte, leading to his capture and killing by NTC forces.

Facing global criticism over the killing, the NTC vowed on Thursday to bring Gadhafi's killers to justice in a sharp break with their previous insistence he was caught in the crossfire with his own loyalists.

A coalition led by the United States, France and Britain launched the first salvos in the air war on March 19, before handing over command of the mission to NATO on March 31.

Unlike other NATO operations, Europeans led the charge with France and Britain conducting the bulk of air strikes while the United States playing a quiet yet crucial role by providing intelligence and air-to-air refueling.

NATO allies have hailed the mission a success, with no casualties on their side and few civilian deaths, but cash-strapped governments have been eager to bring their planes home and focus on the bigger war in Afghanistan.