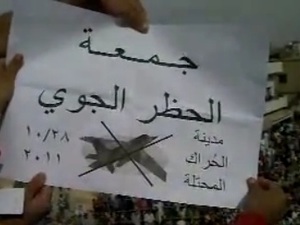 At least 37 people were killed Friday as Syrian security forces opened fire, encircled mosques and carried out arrests in a bid to break up anti-regime protesters who are now calling for a no-fly zone in Syria to protect civilians and soldiers deserting the army, the Syrian Revolution General Commission said.

"Eight civilians were killed in various neighborhoods of Hama, 11 others in the city of Homs and one civilian was killed in Qusayr, in the region of Homs," the Syrian Observatory for Human Rights said earlier on Friday in a statement.

Hama and Homs are at the frontline of the anti-regime protests that have rocked Syria since mid-March, when according to U.N. estimates more than 3,000 people, most of them civilians, have been killed in security crackdowns.

The army has been carrying out operations in Qusayr for several weeks, amid fighting there between troops and suspected army deserters, activists say.

"Despite the siege, the proliferation of checkpoints and the encirclement of mosques, people staged a mass demonstration in Kafr Nabl," a town in Idlib, near the border with Turkey, said the Observatory.

Demonstrators in the northwestern town marched "in support of besieged cities" and demanded "the imposition of a no-fly zone," the Britain-based watchdog said, adding security forces also opened "heavy fire" and arrested "five people" there.

That call was echoed in the flashpoint central city of Homs, the focus of military raids in recent weeks, where demonstrators came out in "most of the city's neighborhoods," the Observatory said.

In the besieged neighborhood of Bab al-Sebaa, one person was killed by sniper fire outside the mosque of Marjeh and another civilian was shot dead by a sniper in the same area while he was "standing on his balcony" at dawn, it added.

Meanwhile, activists said "heavy gunfire" and "five explosions" were heard in Qusayr, a restive town near the border with Lebanon, where security forces sought to break up demonstrators streaming out of several mosques.

Bab al-Sebaa and Qusayr have both been focal points of deadly military sweeps.

In Hama, a city north of Homs, seven people were killed and "three others wounded" by security forces who opened fire to disperse protest.

Clashes were also reported in Hama between suspected army defectors and members of the regular army and the security forces.

Three demonstrators were also arrested in the coastal city of Banias.

Troops also raided the northwestern town of Kafruma, arresting 13 people, including one woman and her 12-year-old son, the same source said.

In Maaret al-Numan, also in Idlib, the funeral of a soldier who defected and was shot dead on Thursday by security forces stationed at a checkpoint turned into a rally demanding the fall of Syrian President Bashar al-Assad's regime.

To the east, in Deir al-Zour, security forces opened fire against demonstrators as they streamed out of mosques after midday Friday prayers, which are a lightning rod for weekly anti-regime protests across the country.

Pro-democracy activist networks spurring protests on the ground each week adopt a new rallying call along the central demand for the fall of the regime.

This week they called for rallies in favor of "a no-fly zone" over Syria in order to protect civilians from military action and to encourage soldiers to defect.

That call coincided with the end of NATO's mission in Libya which had a mandate to protect civilians and ultimately tipped the scales in favor of regular citizens turned fighters who ousted ex-strongman Moammar Gadhafi.

"We call on the international community to impose a no-fly zone so that the Syrian Free Army can function with greater freedom," said the Syrian Revolution 2011 on its Facebook page.

A defecting army officer who has taken refuge in Turkey, Colonel Riad al-Asaad, claimed in July to have established an opposition armed force called the "Syrian Free Army", but its strength and numbers are unknown.

Wu, after holding talks in Damascus with Foreign Minister Walid Muallem, called for an "end to all acts of violence ... and to carry out reforms on the basis of dialogue and peaceful means."

They should get the "no-fly" zone and more. They should get weapons, money and training.
Assad will not be removed from power through non-violent protests. The non-violent aspect of the Opposition has achieved its purpose in delegitimizing the Assad Regime to the International Community. This tactic cannot achieve more than this in the Syrian system, such as it is.

Assad holds power in Syria not by virtue of a constitution, legal elections, or the rule of law, but by brute force. Therefore the only way to remove him from power is through the exercise of brute force as was done in Libya with Gaddafi.

It is time for phase two if the Syrian people are to free themselves, otherwise, they are losing people to Assad's preatorian guards to no strategic end. The international community will not do a military intervention in Syira. We only had one Iraq War in us. Libya is the model. We will do drones but the boots on the grounds have to have Syrian feet in them.

Friday of "bomb us please". Also the video in the article is old. It still has a picture of that Zeinab al-Hossni that was supposed to have been killed and decapitated by security forces, but then appeared alive on TV. These guys are a joke!

37 killed today
Over 300,000 people in the Facegroup Syrian Revolution
More and more defections in the Army everyday

Doesn't seem declining to me...

So are we supposed to be moved by pictures and clips of pigs bleeding in the streets or thugs frightening the population? We have seen thousands of such pictures and clips from Iraq, Afghanistan... where the US launched illegal wars to terminate the Sunni crazies wherever they are.

Allah w akbar for their courage , may Allah be with them

What a surprise, people protesting against the regime get attacked, but the ones that protest for the government are left completely. Yet the brainwashed sheep followers of the Assad gang still believe it's terrorists and extremists doing this.

Syrian Revolution General Commission
Syrian Observatory for Human Rights
The first group I've never heard of, the second is a guy in London.
Why is Agence France Presse the only source for this story? Where is your office?

dear brotherly syrian people:
thats what happens when u leave ur glorious army for too long in a "brotherly" country stealing killing, imagening and creating fires....the two sides in syria are doing "good", the regime is killing after 8 months and the other side is still resisting vigouresly so...civil war is very successful a nice vietnam for the iranians....

Beiruti is exactly on the mark. I could not have said it better.

It is time for pase two to get rid of the killer of Damascus.

Gabby, what pase 2 (I know you mean phase 2 but your brain is so overworked your fingers cannot keep up with it) my friend? Pase 1 is still pending. Not only that, pase one is 11 days overdue and ASSad and his regime are still there! Can we move to pase 2 before accomplishing pase 1? Please, please, please enlighten us. Thanks buddy. Say hi to Master Hallucinante, Dr. Falso. It is obvious that he is doing a great job mentoring you and your friends. Great hope for your parents and also Lebanon. Lebanon's bright future is coming on your backs. EWEEEEEHA.

it will be so interesting if the NO- Fly zone is actually applied to Syria...

but think it through, wouldn't it have deadly consequences throughout the region?

God Bless the United States of America.
2012 will be the year that we will be out of Iraq and we will deal with you Assad.

@chrisrushlau
Yaaa zaki... are there allowed sources of information in Syria??
No!
How come ya zaki??
pfffffff...idiot!