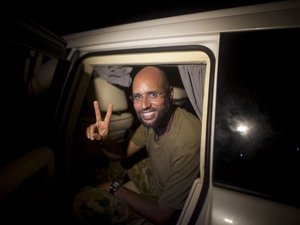 The International Criminal Court is in "informal contact" with Seif al-Islam, the fugitive son of slain Libyan leader Moammar Gadhafi, its prosecutor said on Friday.

"Through intermediaries, we have informal contact with Seif," Luis Moreno-Ocampo said in a statement issued at the court's headquarters in The Hague.

"The Office of the Prosecutor has made it clear that if he surrenders to the ICC, he has the right to be heard in court, he is innocent until proven guilty," Moreno-Ocampo said. "The judges will decide."

But Moreno-Ocampo said his office learned through informal channels that a group of mercenaries were offering to move Seif to an African state not party to the ICC's founding document, the Rome Statute.

"The Office of the Prosecutor is exploring the possibility to intercept any plane within the airspace of a state party in order to make an arrest," he said.

Seif, 39, and Gadhafi’s security chief and brother-in-law Abdullah al-Senoussi, 62, are the most wanted fugitives from the slain despot's ousted circle.

They are wanted by the ICC on charges of crimes against humanity, committed after the start of the uprising against Gadhafi’s regime in mid-February. The ICC issued arrest warrants against the three on June 27.

Seif was Tuesday poised to cross into Niger along with Senoussi, his father's ex-intelligence chief, a Tuareg official said.

Senoussi has passed from Niger into Mali, security sources from both countries said Thursday, with sources claiming he was under Tuareg protection.

It was not known whether Seif was traveling with his group.

Moreno-Ocampo said his office was "galvanizing efforts to implement the arrest warrants issued by judges of the ICC against Seif al-Islam and Abdullah al-Senoussi."