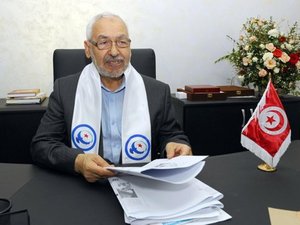 The head of the Islamist party Ennahda that won Tunisia's weekend elections called Friday for calm in Sidi Bouzid, the town where the north African country's revolution began, after overnight unrest.

"We call for calm and the preservation of public property," Rached Ghannouchi said after more than 2,000 youths marched on Ennahda's headquarters and sacked public buildings in Sidi Bouzid following the announcement of election results on Thursday.

The interior ministry announced that a curfew would be imposed from Friday night in the central town, which is symbolic of the Tunisian revolution that began there in December 2010 when a youth burned himself to death.

"A curfew will be installed from tonight at 7:00 pm (1800 GMT) to 5:00 am tomorrow, and that will continue every day until further notice," a ministry spokesman told Agence France Presse.

The Islamist leader said that in the violence he saw "the hand of the dissolved RCD," referring to the Rally for Constitutional Democracy party of Tunisia's former leader, Zine el-Abidine Ben Ali, who was ousted last January by the popular uprising sparked in Sidi Bouzid.

Demonstrators were protesting against the invalidation by the electoral commission of the party list of the Popular Petition, led by wealthy businessman Hechmi Haamdi, who had been declared winner in Sidi Bouzid, his home region, though he is based in London and campaigned through a television station.

This party list won 19 seats in Tunisia's new constituent assembly, but was declared invalid in six constituencies. The Popular Petition is suspected by other political parties of being run by former RCD members.

A police car was burned in the violence and police used tear gas on demonstrators, but there were no casualties, according to the interior ministry.

Separately, Ghannouchi reaffirmed Ennahda's "commitment to the women of Tunisia," pledging to uphold their social gains.

"Ennahda reaffirms its commitment to the women of Tunisia, to strengthen their role in political decision-making, in order to avoid any going back on their social gains," Ghannouchi told a news conference, adding that 42 of the 49 women elected to the constituent assembly were Ennahda candidates.

"Democracy is for everyone, our hearts are open to everyone, we ask that all our brothers, whatever their political outlook, participate in the writing of the constitution and the installation of a democratic regime," Ghannouchi said.

"The revolution didn't take place to destroy a state, but to destroy a regime. We are determined to protect the Tunisian state," added the Ennahda leader, whose party won 90 of the 217 seats in the north African country's new constituent assembly in Sunday's election.

"There has been a revolution in this country. People want a change in politics and in faces," added Ghannouchi, whose party was banned under Ben Ali.