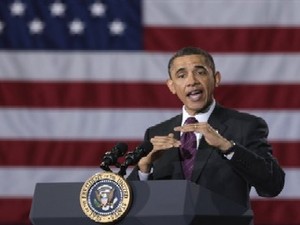 "I congratulate King Abdullah and the Saudi people on the selection of Prince Nayef bin Abdul Aziz as crown prince. We in the United States know and respect him for his strong commitment to combating terrorism and supporting regional peace and security," Obama said in a statement.

"The United States looks forward to continuing our close partnership with Crown Prince Nayef in his new capacity as we strengthen the deep and longstanding friendship between the United States and Saudi Arabia."

Nayef, 78, served as interior minister and led a fierce crackdown on al-Qaida in Saudi Arabia, and is believed to oppose reforms that could liberalize the country's ultra-conservative Islamic society.

He is also known for his suspicion and mistrust of Saudi Arabia's arch-rival Iran, and has pushed for hardline policies towards the Shiite nation.

Nayef was named as crown prince on Thursday and succeeds prince Sultan bin Abdul Aziz, who died last week in New York and was buried Tuesday in Riyadh.

The key diplomatic ties between Saudi Arabia and the United States have appeared on stronger footing in recent months following tensions provoked by U.S. support for Arab Spring revolutions.

National Security Advisor Tom Donilon said in September that the relationship was now in "very good shape" due to shared strategic interests.

Washington and Riyadh have also worked together in recent weeks following the exposure of what Washington says was a plot by elements of Iran's government to assassinate the Saudi ambassador to the United States.

Obama is brilliant as usual: the great promoter of democracy praises one of the most reactionary states in the world. So, democracy shows its true essence.