Thousands of Egyptians Call on Military to Leave Power 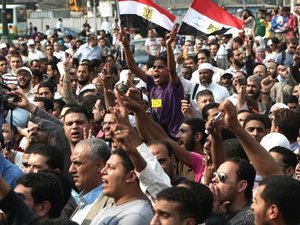 Several thousand protesters in Cairo called on the ruling military on Friday to promptly transfer power to a civilian government and exclude old regime figures from politics.

The protesters in Tahrir Square, the epicenter of Egypt's uprising that ousted president Hosni Mubarak in February, chanted "down with the military" and called on the ruling generals to "return to the barracks."

The military assumed power after Mubarak's ouster on February 11, promising a transition to civilian rule within six months. It is headed by Mubarak's former defense minister Field Marshal Hussein Tantawi.

Protesters at first hailed the military for not cracking down on the uprising after Mubarak called soldiers to the streets on January 28, following attacks on police stations.

But its popularity has eroded amid accusations of rights abuses and suspicion that it is prolonging the transition, which it now says will be happen after presidential elections sometime next year.

Egypt will vote for a new parliament starting on November 28, but parties and activists who spearheaded the anti-Mubarak revolt fear his supporters will enter parliament, either as independents or members of newly formed parties.

Activists have called for a law excluding corrupt politicians and they recently started an Internet campaign to expose past members of Mubarak's now dissolved party.

Mubarak himself is facing trial for allegedly ordering the killings of anti-regime protesters during the revolt. Several of his senior aides have already been imprisoned for corruption.