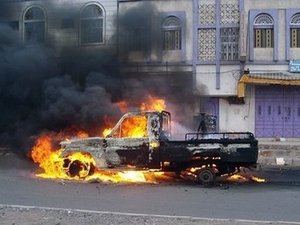 Yemenis marched by the thousands on Friday demanding President Ali Abdullah Saleh be tried, as a woman was killed by a sniper and five other people were wounded, four critically, witnesses said.

Meanwhile, an officer in charge of an anti-terrorism unit in the main southern city of Aden was killed in a car blast that was blamed on al-Qaida.

"O men who love peace in the world, Saleh must face justice," chanted a crowd of 10,000 people that amassed after Friday prayers in Sittin Street, near Change Square, which has become the epicenter of anti-regime demonstrations.

The opposition has been calling since January for the ouster of Saleh, whom they accuse of nepotism and corruption, but the strongman has refused to step down despite pressure from Gulf nations and the U.N. Security Council.

"No immunity, no protection, Saleh and his agents must be judged," demonstrators yelled, galvanized by an imam who called on regime loyalists to "join their brothers in Change Square."

"We all need this revolution to stop the injustice of Yemen," he said.

The echo of explosions coming from the direction of al-Hassaba, a neighbourhood in northern Sanaa, rang out in the central square, an Agence France Presse correspondent said.

Meanwhile, pro-Saleh demonstrators gathered near the presidential palace and chanted their support for the embattled leader and for Yemeni-Saudi ties, paying tribute to the neighboring kingdom's late crown prince, Sultan bin Abdul Aziz.

A sniper killed a woman as she walked with her husband along Hael Street, which separates areas controlled by forces loyal to the government from those held by dissident troops supporting the opposition, witnesses said.

The body of Kifaya al-Amudi, 28, was taken to a field hospital in Change Square, a medical official told AFP.

There were also anti-regime protests in Ibb and Hudeida, residents said.

In Taez, Yemen's second city, five people were wounded, four of them critically, when security forces opened fire against a funeral procession in a fiefdom of the opposition, witnesses said.

And in Aden, a suspected Qaida attack killed an officer who led an anti-terrorism unit, a police officer told AFP.

"A device placed under the car of colonel Ali al-Hajji, head of Aden's anti-terrorism unit, exploded, killing the officer and wounding two of his children," the source said.

The device exploded as the officer drove through the al-Arish neighborhood, near the airport, according to the police officer, who blamed al-Qaida.

Al-Qaida in the Arabian Peninsula, which formed in January 2009 when Yemeni and Saudi branches of the extremist network merged, has exploited the popular uprising against Saleh to reinforce its presence in Yemen's south and east.