Kennedy, U.S. Envoy to Japan, Caught up in Email Controversy 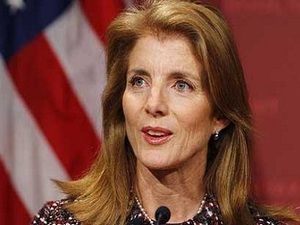 Caroline Kennedy, the U.S. ambassador to Japan and daughter of late president John F. Kennedy, was criticized on Tuesday for using private email for official business.

The latest revelations about a high ranking diplomat were given greater resonance in the light of the scandal hanging over former secretary of state Hillary Clinton.

"In addition, OIG identified instances where emails labeled 'Sensitive but Unclassified' were sent from, or received by, personal email accounts," it said.

State Department guidelines require staff to use official email accounts -- judged more secure -- to send government business, which then form part of the historical and legal record of their posts.

During her term leading the department between 2009 and 2013, Clinton departed from this protocol and used a personal server and private account for all email.

She has since handed over around half of the mails from the server to the department so that they can judge whether they should be classified or made public.

But she has come under intense criticism for potentially exposing official business to hackers and allegations that the 30,000 or so mails that she reportedly had wiped from the server could contain compromising material.

Kennedy, a political appointee of President Barack Obama and not a career diplomat, will not face the same level of scrutiny as Hillary Clinton, but the breach is further embarrassment for the State Department.

At a press briefing in Washington, department spokesman John Kirby defended the embassy and its illustrious ambassador.

"It is not prohibited to use private email. It is discouraged, obviously," he said.

"They've taken the inspection report very seriously, as we would expect them to, and they're implementing all those recommendations."