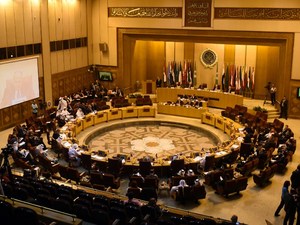 The Arab League said it had postponed indefinitely a ministerial meeting set for Thursday to approve the creation of a joint military force to intervene against jihadists.

A meeting of defense and foreign ministers "has been postponed indefinitely and a new date will be set later," the league's secretariat said Wednesday.

No reason was given for the postponement, but the league statement said it came at the request of Saudi Arabia, backed by Bahrain, Iraq, Kuwait, Qatar and the United Arab Emirates.

At a summit in March, Arab leaders agreed to form the force, and army chiefs have already met twice in Cairo to work on the details.

The decision to create the force was mostly aimed at fighting the Islamic State Group, which has overrun swathes of Iraq and Syria and secured a foothold in Libya and Egypt's Sinai Peninsula.