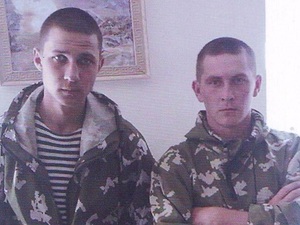 Fyodor Basimov and Ildar Sakhapov, both 24, were stationed at Russia's 201st military base in Tajikistan when they killed 36-year-old Rahimjon Teshaboev last year.

On Wednesday, Basimov and Sakhapov were sentenced to 17 and 13 years in prison respectively.

Under the terms of an agreement between Russia and Tajikistan, crimes committed by Russian soldiers in the country are subject to Russian law.

Teshaboev's body was found with knife wounds last August seven kilometers from the Russian military base outside the capital Dushanbe.

Nigora Khaitova, representing the family of the murdered father-of-three, said he was killed after loaning money to one of the soldiers.

"After the murder, the soldiers stole a further 37,500 roubles ($542 at the current rate) belonging to the taxi driver," Khaitova told AFP.

The sentencing comes amid periodic tensions between the local Tajik community and Russian soldiers serving in the ex-Soviet country.

In a separate incident in Tajikistan last week, a Russian soldier attacked a 24-year old taxi driver with a knife leaving him in a critical condition.

In July, allegedly drunk Russian soldiers and Tajik locals were involved in a massive brawl in the provincial Tajik town of Kulob.

Around 7,000 Russian soldiers are stationed in the impoverished Central Asian country that shares a border more than 1,200 kilometers long with Afghanistan.

In 2012, Russia and Tajikistan agreed to extend the agreement for the 201st military base -- which consists of three separate military installations -- until 2042.

Earlier this month a Russian military court sentenced a soldier accused of killing a family of seven in Armenia to 10 years in jail for deserting his base in the ex-Soviet state.