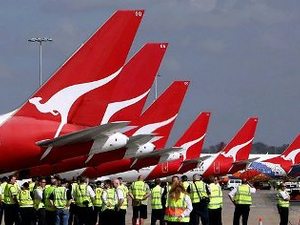 Qantas Airways grounded its global fleet indefinitely Saturday in a lockout of workers whose strikes have disrupted airline operations for weeks, and the government said it would seek arbitration.

Flights in the air were continuing to their destinations. Booked passengers were being rescheduled at Qantas' expense, chief executive Alan Joyce said.

Bookings already collapsed after unions warned travelers to book with other airlines through the busy Christmas-New Year period, and Joyce told a news conference in Sydney the unions' actions have caused a crisis for Qantas.

"They are trashing our strategy and our brand," Joyce said. "They are deliberately destabilizing the company and there is no end in sight."

Transport Minister Anthony Albanese said the government would apply to an arbitration court to rule on the strike action and the airline's response.

"The government is extremely concerned about the future of Qantas, its work force but also the traveling public," Albanese told reporters.

All 108 aircraft in as many as 22 countries will be grounded until unions representing pilots, mechanics, baggage handlers and caterers reach agreements with Qantas over pay and conditions, Joyce said.

"We are locking out until the unions withdraw their extreme claim and reach agreement with us," Joyce said, referring shutting staff out of their work stations.

"This is a crisis for Qantas. If the action continues as the unions have promised, we will have no choice but to close down Qantas part by part," he added.

Staff will not be required to show up at work and will not be paid starting Monday, Joyce said.

Joyce estimated the grounding will cost the airline $20 million a day. It already had been forced to reduce and reschedule flights for weeks because of a series of strikes and overtime work bans over staff concerns that their jobs are being moved overseas.

In mid-October, Qantas grounded five jets and reduced domestic flights by almost 100 flights a week because aircraft mechanics had reduced the hours they were prepared to work.

Qantas infuriated unions in August when it said it would improve its loss-making overseas business by creating an Asia-based airline with its own name and brand.