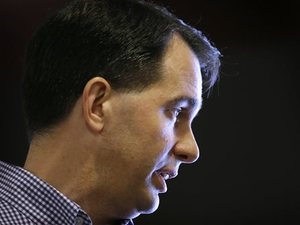 Wisconsin Governor Scott Walker, who is seeking the Republican nomination for the White House, said Sunday that building a wall between the U.S. and Canada was a "legitimate" idea to explore.

Immigration is a hot-button topic in U.S. politics and Donald Trump, the leading Republican contender, has added fuel to the fire by promising to have Mexico pay to build a wall between the United States and its southern neighbor, angering many Hispanics.

Walker told NBC television that security concerns came up in his talks with people in New Hampshire, which borders Canada, and that he would be open to building a wall to secure the northern border as well.

"Some people have asked us about that in New Hampshire. They raised some very legitimate concerns, including some law enforcement folks that brought that up to me at one of our town hall meetings about a week-and-a-half ago," Walker said.

"So that is a legitimate issue for us to look at."

Trump leads the 16 other Republican candidates with 28 percent support among registered voters nationwide, up from 20 percent in a similar July 30 survey by Quinnipiac University, a survey released Thursday showed.

Walker is polling sixth at about six percent, experts say.

The brash billionaire Trump caused widespread outrage in June when he accused illegal immigrants from Mexico of importing crime, rape and drugs into the United States.