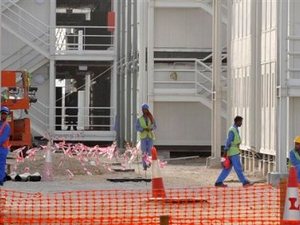 Branches of the Louvre and Guggenheim art museums being built as part of an ambitious cultural district in Abu Dhabi could now open at least a year later than planned, the developer and an official with knowledge of the projects said Saturday.

Questions about the future of the Saadiyat Island cultural district have swirled among contractors in the Gulf for months.

They came into sharper focus this week when the project's government-backed developer disclosed that it was temporarily dropping plans to award a major construction contract.

The Louvre branch, designed by French architect Jean Nouvel, was originally scheduled to open in 2012, but that date was later pushed to the following year.

A national museum and the Frank Gehry-designed Guggenheim were expected to follow in quick succession, with all three museums open by 2014.

"Due to the immense magnitude of the work associated with the development of such consequential projects, the company has decided to extend the delivery dates," TDIC said in a statement released Saturday.

"This will ensure that quality is not compromised, and allow each establishment the time needed to create its own identity on the local and international cultural stage."

TDIC didn't disclose when the museums would now open, but insisted the delay would "only have a moderate impact on the delivery timeline."

However, the delay will likely push the opening dates back by at least a year, and possibly longer, according to a person familiar with the project.

The person was not authorized to discuss the project publicly and spoke on condition of anonymity.

"There will be a certain gap between each museum ... The extension will not exceed five years from the original plan," the person added.

The shift comes just days after TDIC said all its projects on Saadiyat Island were moving ahead as planned. As recently as Monday, the company said it still expected the Louvre outpost to open by 2013.

The Guggenheim and the Louvre branches were the highest-profile attractions planned for Saadiyat Island when the project was announced in 2007.

The waterfront museum campus is also expected to include a maritime museum and a futuristic-looking performing arts center.

It is just a short drive from the downtown skyscrapers rapidly being built along Abu Dhabi's Gulf corniche.

Some preliminary foundation work has been completed, but little progress is visible above ground on the wind-swept desert construction site where the museums will eventually sit.

In March, more than 130 international artists and writers promised to boycott the Guggenheim unless authorities do more to protect workers' rights at the site.

That followed an earlier report by Human Rights Watch that outlined alleged abuses against migrant workers on the project. TDIC has said it is committed to protecting workers' rights and has taken on board many of Human Rights Watch's recommendations.

TDIC is one of several companies set up by Abu Dhabi to diversify the economy and drive development in the emirate, which borders Dubai to the south.

The money-losing company relies heavily on direct cash infusions from the oil-rich Abu Dhabi government, but has also used bank loans to fund some of its operations.

Besides the museums, it is building vast tracts of luxury villas, hotels and other property developments in the Emirati capital.

Saud Masud, a real estate and construction analyst at Rasmala Investment Bank in Dubai, said it makes sense to revise contract bids and stretch out project timetables given the tough economy.

But he also noted that Abu Dhabi government-backed developers such as TDIC need to tread carefully because of the still-slumping real estate market.

"Perhaps some people (believe there are) no liquidity problems in Abu Dhabi because it is an oil rich emirate. I think that is a bit optimistic, as in any property crunch liquidity may suffer regardless of the solid solvency position," he said.

"For TDIC, they have to be careful with any loss-making projects. How long can TDIC specifically sustain less-than-economical ventures, I'm not sure."